What will Williamsburg feel like without the L train? Forget the 300,000 New Yorkers who may live elsewhere and need it to get to work—Governor Cuomo has!—will your favorite bars and restaurants feel blissfully accessible? How many pieces of copper will you need to strip from Urban Outfitters’ corpse to barter passage to the Jefferson stop? Who do you love and who do you trust?

On the weekend of March 1 and 2, 2014, before anyone knew what a vegetarian ramen burger was, the MTA shut down the L train between Myrtle-Wycoff Avenue and 8th Avenue in Manhattan, mimicking the impending L train shutdown the MTA has to initiate in order to make Sandy-related repairs to the tunnel underneath Manhattan next year.

Agustin Indaco, a Ph.D. student in economics at CUNY's Graduate Center, used Instagram's API to obtain all 490,000 geo-coded images shot in Williamsburg and Greenpoint between February 26, 2014 and August 3, 2014, and compared them to that weekend in March of 2014 when we somehow lived without most of the L train.

While this data is limited to People Hanging Out In Williamsburg Who Must Let Those Who Are Compulsively Glancing At Tiny Curated Squares Of Their Existence Know That They Are In Fact, In Williamsburg—Do You Not Want This Life?, it is all the same revealing. 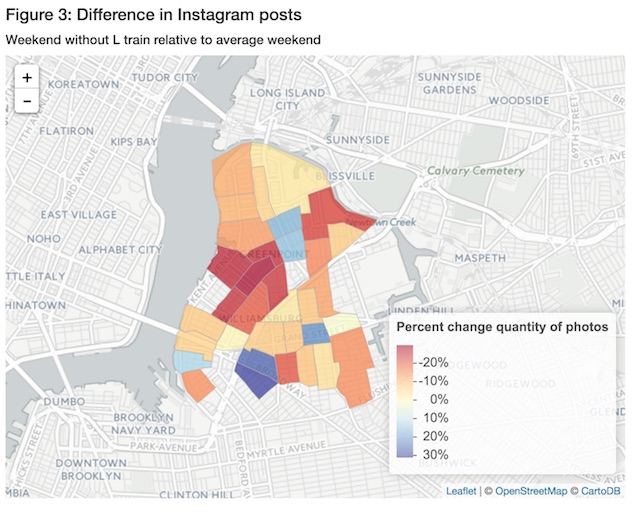 Insufferable Instagram activity decreases by as much as 50% near the Bedford Avenue stop, the L’s busiest station, and increases by roughly 30% next to the Marcy J/M/Z stop. There’s also a near-20% increase in geotagging near the Nassau G stop in Greenpoint.

“Of course, anyone would have predicted that the blocks around the Bedford Ave station would see the biggest impact, but the magnitudes are impressive,” Indaco writes in an email.

Indaco also broke down the differences during the day and at night. 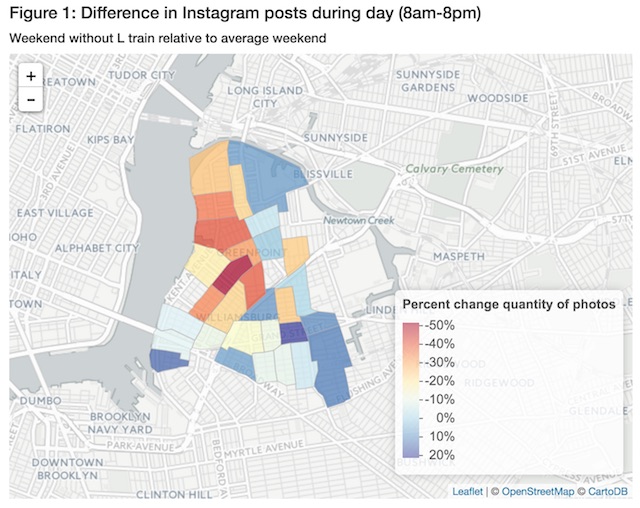 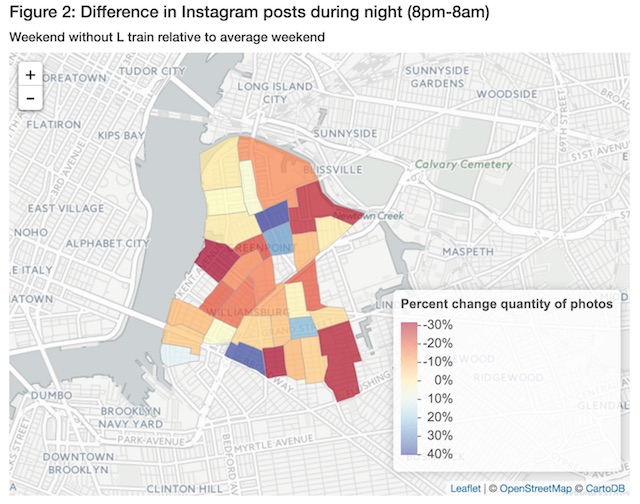 It's worth noting that these maps are only considering a weekend L train shutdown—while the MTA is considering shutting down the L only on weekends to make the repairs (which could potentially take up to seven years), the option to cease service seven days a week is also being considered.

In either case, the MTA is planning on increasing M train service and adding two cars to the G train; shuttle buses are also a possibility. The good news is that the governor has allocated funding so that you will be able to geotag your Instagram photos from 30 new subway stations—after they are closed for an indeterminate amount of time.

#instagram
#l train
#l train shutdown
#what a time to be alive
#original
Do you know the scoop? Comment below or Send us a Tip