Interactive Map Shows What Parts Of Williamsburg & Greenpoint Are Most Toxic

It's well-established, if not widely advertised at condo open houses, that Greenpoint and parts of Williamsburg are a poisonous wasteland. Still, even if you know the Exxon Mobil spill (17-30 million gallons of oil leaked into Newtown Creek over decades and discovered in 1978) from the NuHart plume (face-numbing and liver-destroying TCE ground contamination from the former NuHart Plastics facility at Dupont and Franklin streets) it can be hard to keep it all in your head. Enter the community group Neighbors Allied for Good Growth's new map, which lays out where Williamsburg and Greenpoint's Superfund and brownfield sites, truck-exhaust-promoting waste transfer stations, and historically industrial lots, along with projected flood risks, asthma rates, and dots marking the spots of many, many spills.

Looking at all the factors together, patterns emerge. The largely industrial areas around the waste transfer stations and areas along the Brooklyn-Queens Expressway have higher asthma rates, though mysteriously, an area around the Williamsburg Houses and Borinquen Plaza II NYCHA developments has by far the highest asthma rate, with 31 cases per 1,000 people. The projects are not directly next to either truck traffic source, but do abut Bushwick Avenue, which is popular with trucks though it's not a truck route.

Most of the biggest swaths of contamination are along the East River and Newtown Creek waterfront, past homes of industry and new and future homes of our tech startup overlords, though manufacturing zoning in East Williamsburg may keep condo dwellers out of the muck and mire for a while. Add a major storm like Hurricane Sandy to the mix and the highest-rent and most carcinogenic parts of North Brooklyn become part of a stew that nearly pinches off Greenpoint, leaving Humboldt Street as the only road in, and McGuinness Boulevard the only way out. 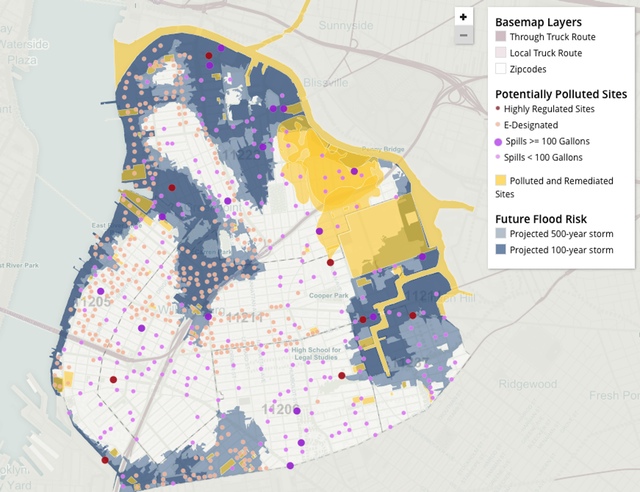 What Williamsburg and Greenpoint are projected to look like in the event of a 100-year flood (lighter gray) or a 500-year flood (darker blue). (NAG)

The map was supposed to be completed last month, but for now it's in beta, and the final version won't be ready until the spring, NAG member Rita Pasarell told The Brooklyn Paper.