New York City has lost tens of thousands of rent-stabilized apartments in the last 20 years, but where exactly are they? There are no publicly available official records—but now John Krauss and a team of “civic hackers” have put together a map showing where more than 50,000 apartments have been deregulated in the last eight years, building by building.

With shades of red signifying deregulation of more than half the rent-regulated apartments in a building, orange a loss of 5 to 50 percent, and yellow a slight decrease, Manhattan looks like a blaze of fall foliage. The deregulation was most intense on the Upper East Side and East Village/Lower East Side.

The few places where the number of rent-stabilized apartments has stayed stable or increased include Stuyvesant Town/Peter Cooper Village—where more than 3,000 apartments were reregulated by a 2009 court decision because the owners were taking J-51 tax abatements designated for rent-stabilized landlords—and the new buildings west of Penn Station, which got tax breaks in exchange for containing some below-market apartments.

The biggest losses came in Manhattan, but red clouds also loom over downtown Brooklyn out to Park Slope and Crown Heights; Williamsburg, Greenpoint, and Bushwick; and the Astoria-Long Island City area. Which neighborhoods are likely to be next? Streaks of yellow run through southern Brooklyn between Ocean Parkway and Ocean Avenue; central Queens, from Jackson Heights to Forest Hills and Kew Gardens, and the western Bronx, roughly along the Grand Concourse and points northwest.

The information was not easy to come by, Krauss says. The state Homes and Community Renewal agency lists only which buildings have regulated apartments, not how many, and is “very protective of its data,” denying Freedom of Information Law requests under the pretense of privacy.

But owners of buildings with rent-stabilized apartments have to pay a $10-per-unit fee to the city Finance Department when they pay property taxes. So in what Krauss calls a “labor of outrage,” he and his team went over “hundreds of thousands of tax bills” covering the years 2007 to 2014 to develop the map.

Their estimate that about 50,000 of the city’s 1 million rent-stabilized apartments were deregulated during this period differs somewhat from the city Rent Guidelines Board’s figures, in which about 20,000 new apartments in Brooklyn and the Bronx reduce the overall loss to between 30,000 and 35,000.

In Bushwick, the blocks of 1931-vintage buildings along the L train on Wyckoff Avenues and the Knickerbocker Avenue commercial strip two blocks south are speckled with clusters of red. The three eight-unit buildings at 143, 147, and 157 Starr Street, down the block from the Jefferson Street L station, have only one rent-stabilized apartment left. Two are left in the three six-unit buildings at 249, 255, and 257 Himrod Street, a block off Knickerbocker marked by a mural of a Federico Garcia Lorca poem.

In the three six-unit buildings at 1430, 1432, and 1438 DeKalb Avenue, just south of Knickerbocker, only one is left—in 1438, where abandoned TVs and couch frames are stuffed into the spaces on the side of the steps, between the red-brick front and the iron fence along the sidewalk.

The voices on the block on a weekday afternoon are working-class Spanish. A woman in a purple tank top leans out a second-floor window to talk to two men on the stoop. But there are obvious signs of wealth moving in. 1432 has a new gray faux-clapboard façade affixed to the old brick. 1434 has a new angular archway of Barclays Arena rusted metal framing the front door. Across the street is a new Miamiesque high-rise with balconies.

Here you can witness the speed of gentrification. What took a generation on the Lower East Side, a war of attrition being fought block by block, apartment by apartment, has happened in Bushwick in barely a decade. 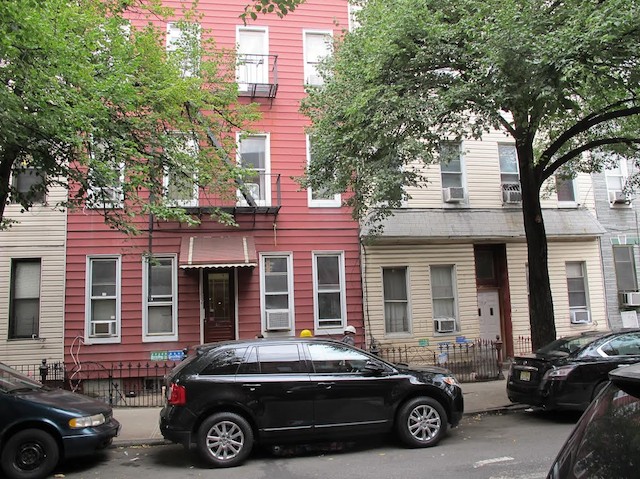 Landlords have gotten the tactic of driving rent-regulated tenants out down to “boilerplate,” says Brandon Kielbasa, an organizer with the Cooper Square Committee on the Lower East Side. In that neighborhood, with market-rate apartments going for well above the $2,700-a-month threshold for vacancy deregulation, owners have an “incredible incentive” to harass rent-stabilized tenants.

“Any new landlord buying a building” in the neighborhood, he says, “pretty much has no intention of letting rent-stabilized tenants stay.”

The harassment process happens in three distinct stages, he explains. First is acquisition, where the new owner tries to oust rent-stabilized tenants, such as by issuing bogus eviction notices and offering buyouts—often telling them “we’re going to get you out anyway, so you might as well take the money.”

The second is construction, renovating the vacant apartments: Owners can add 1/60th to 1/40th of the cost of renovations on to the next tenant’s monthly rent, and the annoyances—often toxic—of living in a construction site can also drive tenants out, especially when contractors ignore that other apartments are occupied. During renovations at 102 Norfolk St. in 2014, owned by Samy Mahfar’s SMA Equities, city inspectors found lead-dust levels more than 2,700 times the legal limit on a staircase. That kind of construction “is harassment and has intentions behind it,” says Kielbasa.

The third stage, which Kielbasa calls “maintenance—or lack thereof,” comes when renovations are complete. Some owners will try to sell the building for a quick profit, while others will hold onto it. Steven Croman, one of the Lower East Side’s most notorious landlords for harassing tenants, is in the latter category. Buildings in his empire of 140-odd properties are prominent red spots on the map: At 420 East Ninth St., seven out of ten apartments were deregulated, as were 11 out of 20 at 424 East Ninth, 12 of 20 at 380 East 10th, 17 of 20 at 382 East 10th, and 28 of 40 at 432 East 13th. 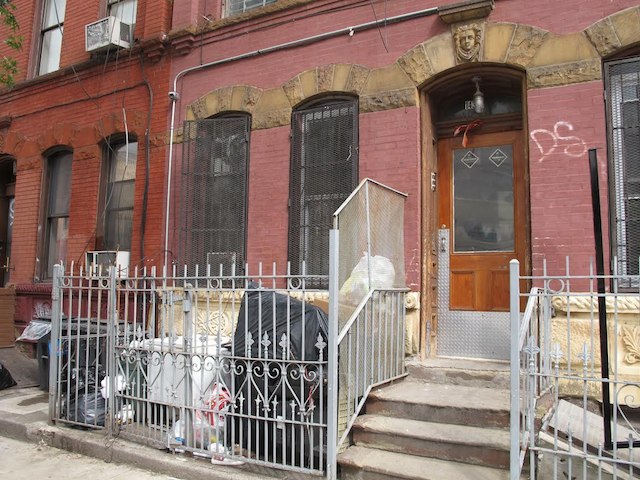 1438 DeKalb Avenue: Only one of six apartments is still rent-stabilized. (Steven Wishnia / Gothamist)

A similar pattern is happening in Flatbush, a heavily Afro-Caribbean working- to middle-class neighborhood where rents are beginning to reach the $2,700 mark, particularly in the Prospect-Lefferts Gardens and Ditmas Park areas.

“I can't even begin to describe to you what families who have lived in the neighborhood for 20 or 30 years are going through now,” says Aga Trojniak, coordinator/organizer of the Flatbush Tenant Coalition, citing trumped-up eviction attempts and owners offering “paltry sums of money to move out” and “hounding people nonstop” to accept.

“The harassment used to be somewhat invisible, so people thought it was just them. Now it's very clear that it's happening to everyone who's lived in the building for a while. The harassment is systemic and rampant.”

Krauss's map lists 25 of 26 apartments deregulated at 250 Maple St. in Prospect-Lefferts Gardens and 36 of 43 at 335 Lefferts Avenue. Just over the border in Crown Heights, one block of Sullivan Place has three red buildings. At 286 Sullivan Place, 65 of 74 apartments were deregulated—even though the building is listed as receiving J-51 tax breaks in 2014, which are supposed to be exclusively for renovations in rent-regulated buildings.

More important, says Trojniak, is the once-obscure issue of “preferential rents.” As owners can raise the rent by 20 percent when a tenant moves out, rents in neighborhoods with significant turnover often rise faster than what people will pay, at least for now. In those cases, landlords usually offer tenants a discounted “preferential rent.” 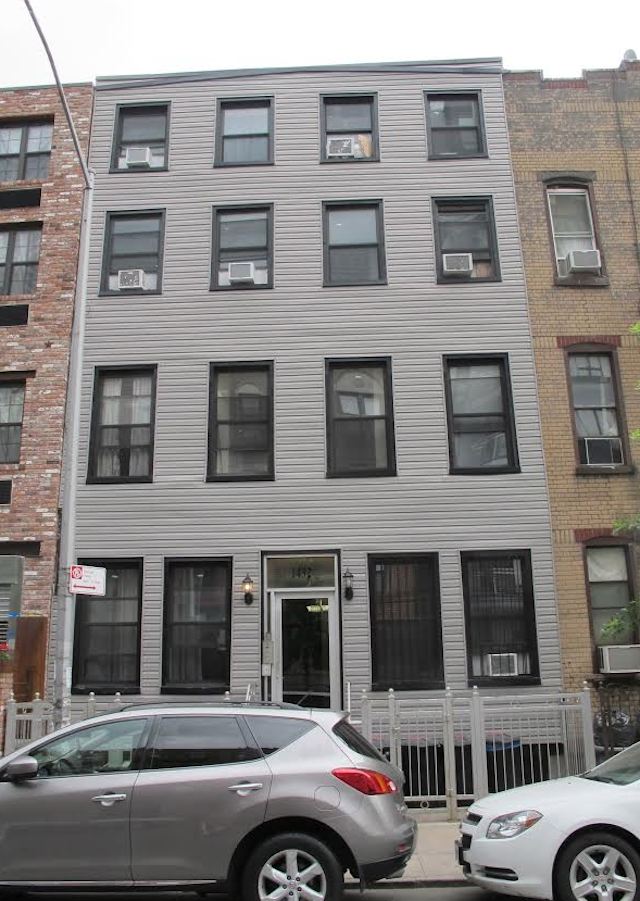 “Right now, one-bedrooms are going for about $1,900 in our neighborhoods,” Trojniak explains. “But that's usually the preferential rent that tenants pay. Every time a new tenant moves out of an apartment—and there is a LOT of turnover for new tenants—the landlord substantially raises the LEGAL rent, and right now many of those rents are definitely above not just $2,500 but also above $2,700. The ‘legal’ rent is what determines whether an apartment is rent-regulated, even if no one is actually paying that rent.”

The catch there is that if the legal rent is high enough to be deregulated, the tenant has no right to renew their lease. If it’s still regulated, unless the lease states that they are entitled to stay at the preferential rent, they can be hit with an increase of several hundred dollars when the lease expires.

This is becoming a major issue in some neighborhoods, says Jonathan Furlong, head organizer at the Association for Neighborhood Housing Development. According to him, community groups around the city agree that preferential rent “is killing us."

Rent-stabilized apartments are also disappearing from areas where market rents haven’t reached the deregulation threshold. In Brownsville, Brooklyn’s poorest neighborhood, there are at least four buildings with more than half the apartments deregulated. At 1803 Pitkin Avenue, only two of the 26 apartments were still rent-stabilized—in a building where tenants complained about not having heat or hot water on seven days last January.

Some of this may be landlords simply failing to register rent-stabilized apartments with the state—but tenant advocates say there’s often an agenda behind that. 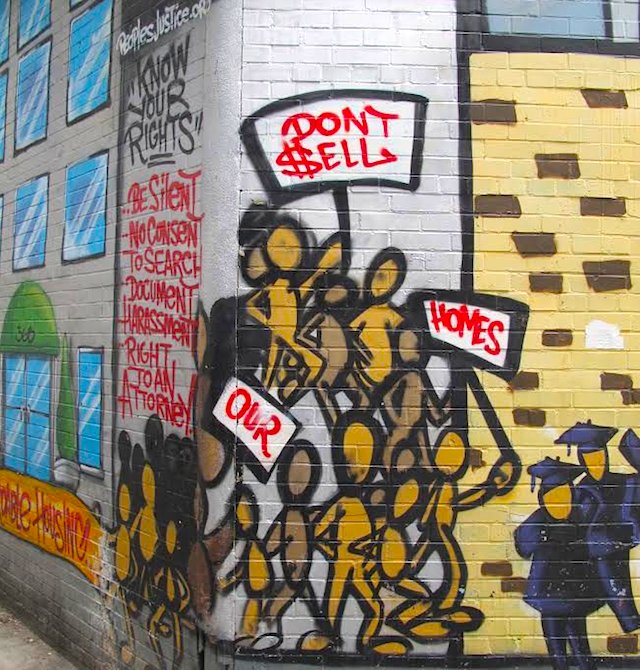 The "Don't $ell Our Homes" mural at Knickerbocker and Myrtle Avenues in Bushwick. (Steven Wishnia / Gothamist)

“In our experience, landlords who fail to register rent-regulated apartments are doing it not out of sloppiness but out of strategy. Trying to hide what they are really charging tenants, or trying to hide what they will eventually claim is the legal rent,” says Aga Trojniak. The state housing agency’s “four-year rule,” in which tenants are not allowed to challenge rent increases more than four years old unless they can show that the apartment has been fraudulently deregulated, “makes this a productive strategy for a landlord trying to deregulate apartments.”

Mosholu Parkway, a tree-lined boulevard near the Bronx Botanical Gardens, is also not a place where rents have breached the $2,700 threshold. Two-bedrooms there are advertised for less than $1,800. Yet at 15 West Mosholu Parkway North, 48 of the 50 units have been deregulated. The landlord has been renting vacant apartments as shelter for homeless families. In 2009, one tenant told the Bronx Times that half the building’s tenants had left or been evicted since a new landlord bought the building in 2006. “From what I hear, the city pays $3,000 for a one bedroom. I pay $950,” another said.

Despite all this, Kielbasa says, more than 40 percent of the apartments on the Lower East Side remain rent-stabilized. He credits this to the tenaciousness of tenants there, given the neighborhood’s long history of radicalism and long-term residents who “have their chops together when it comes to coming together as a community.”

Fighting an illegal overcharge is “cumbersome,” he says. Tenants who aren’t poor enough to qualify for legal assistance have to ante up at least $5,000 for a lawyer. Some decide that’s cheaper than moving. Market-rate tenants face an additional problem: Their lease will likely expire before their complaint is resolved, and the landlord is not required to renew it. In these cases, says Kielbasa, lawyers can ask for a stay of eviction pending the outcome of the overcharge complaint.

The one exception to the four-year rule, says a staffer at the Urban Justice Center, is if the tenant is claiming that apartment was fraudulently deregulated. If the rent history registered with the state is too minimal to determine what the rent was four years ago, the state housing agency is permitted to look further back.

In Kielbasa’s experience, the tenants most likely to fight back against harassment are those who have “strong opinions about gentrification” and are “willing to take a stand on principle”—or those who stand to get a substantially cheaper apartment by winning an overcharge complaint. In June, a Housing Court judge ruled that Steven Croman had illegally raised the rent on one Greenwich Village apartment from $791 to $2,350.

“If you can’t find out which apartments are stabilized, it makes it easier to overcharge,” says Krauss.