Cars blocking bike lanes rank high among the most dangerous and irritating obstacles you encounter when riding a bike in NYC. You not only have to pull into traffic to go around the car, but you never know when a passenger will door you or if the driver will suddenly pull out and send you careening into traffic. And forget about yelling at a double parked driver, because they might try to run you over. What to do then? Now there's CarsInBikeLanes.NYC, a website that puts the offending driver in the bike lane and their license plate number on an interactive map for the world to see.

CarsInBikeLanes works simply. If you see a car in a bike lane, take a picture. Then head to the site to submit the picture, along with the car's license plate number, the day and time you spotted the car, and the cross streets where you saw it. After the picture is reviewed (and any foul or potentially libelous language is removed from the submission) your picture will go up on a map tagged to the location where you saw the car.

There are currently 204 offenders who've had their pictures put on the site, from people who somehow manage to get themselves into protected bike lanes, to the standard double-parking-in-the-bike lane move that some of us have just been conditioned to accept. While there's no legal action that can be taken against people featured on the site, it's at least cathartic to know there are cyclists everywhere dealing with the same frustration.

CarsInBikeLanes is the brainchild of Nathan Rosenquist, a systems administrator and cyclist, who explained in an email that he created the site as a way to call "undeniable attention to the cognitive dissonance of City Hall's bike lane policies and their lack of leadership on the issue." Rosenquist was especially alarmed that Mayor de Blasio, despite being the architect of Vision Zero, went on the Brian Lehrer show recently and excused drivers who briefly double park in bike lanes. "I don't think he understands that it takes a lot less time to be killed on a bike than it takes to let the kids off at home," Rosenquist said.

The current website is actually Rosenquist's second attempt at making a map that tracks cars parked in bike lanes. The first version of CarsInBikeLanes came out in 2014, but Rosenquist said it languished after a lack of a response. This new version of the site debuted on September 21st, and in addition to letting users see all the pictures of cars parked in bike lanes, you can also click the license plate text to see if the submitted car is a repeat offender. Rosenquist also said that the map is the most up-to-date cycling map in the city, "more complete than both the DOT's 2016 map and Google Maps," as it's pulled from OpenStreetMap, an open source map project that he personally spent time editing to include the city's bike network.

The code for CarsInBikeLanes is open source, so Rosenquist said cyclists in other cities are free to take the code and customize it for their own cities. Already, Rosenquist said that he's heard from cyclists in Atlanta and Washington, DC who have reached out with interest in making maps for their cities.

Beyond his own uploads, Rosenquist said the new version of the site has attracted a couple of what he called "power users" in Harlem and the Park Slope/Gowanus area. The map reflects that reality at the moment, but Rosenquist said he envisions a future in which the site gets uploads every day from users in all five boroughs. "If everyone who learns of this site spends just 30 seconds per commute uploading a single submission, this database should grow by leaps and bounds in no time and we'll have our proof" of cars in bike lanes being a huge problem. 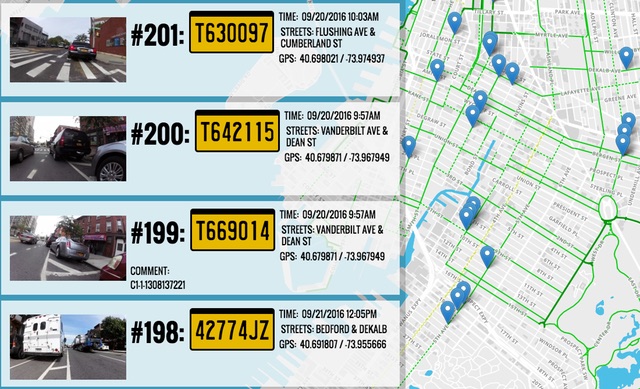 "I know bikes, and I know websites, so I figure one way that I can help build that pressure is to keep a public record of exactly how bad the lane-blocking problem really is," Rosenquist added. He argues that "New York City's streets and traffic management need radical permanent changes to stay sustainable" and that it's imperative that the city install more physically separate bike lanes and step up enforcement of the painted lanes to prevent them from becoming parking lots.

Of course, that would require the police to police themselves.

#ban cars
#bike lane blocking
#bike lanes
#carsinbikelanes.nyc
Do you know the scoop? Comment below or Send us a Tip