Last month, everyone was amazed by the "remarkable" voter turnout for the Democratic primary—913,471 people showed up at the polls and managed to submit their ballots without trouble. But even with that enthusiasm, that voter turnout that was only 26.85% of registered Democrats in NYC. (Okay, even sadder is that only 9.75% of registered NYC Democrats voted in the 2014 gubernatorial primary).

Now we are facing the general election on November 6th, and while the primary was exciting, there are very important races for New Yorkers! Some of us get to weigh in on a number of State Senate races that could change who's in charge and exciting Congressional matchups in Queens and Staten Island. All New York voters will get to decide who should be Governor and choose a new Attorney General—and NYC voters can consider very important NYC ballot measures. Surely, our turnout can be better ... can't it?

Gothamist has created a map—find it right here—for you to see how your block and election district voted in the last gubernatorial election—and you can share the results to encourage your neighbors to make their voice count as well. And beat the 23% voter turnout number because that's pitiful! Heck, you can even click around the map and see how nearby districts did. Maybe you'll see that your friend's block kicked your block's butt—or that your coworker's block has a bunch of lapsed voters.

This is how Mayor Bill de Blasio's Park Slope block did: 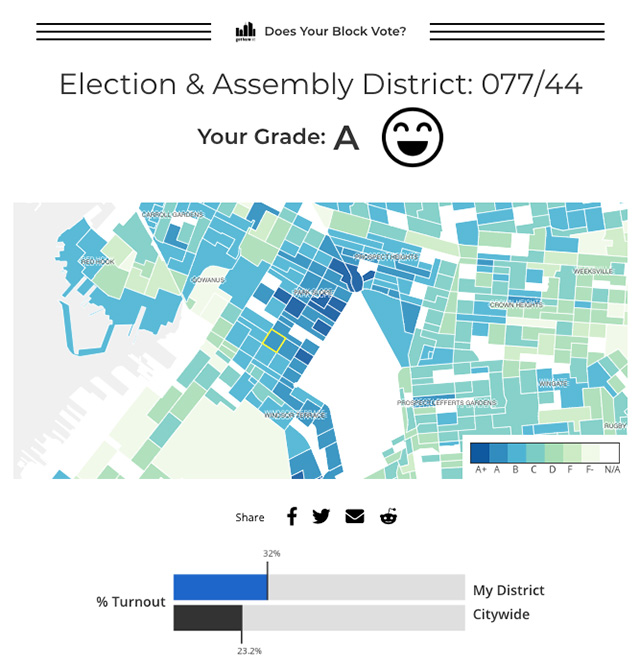 And this is how a pocket of DUMBO along the East River did: 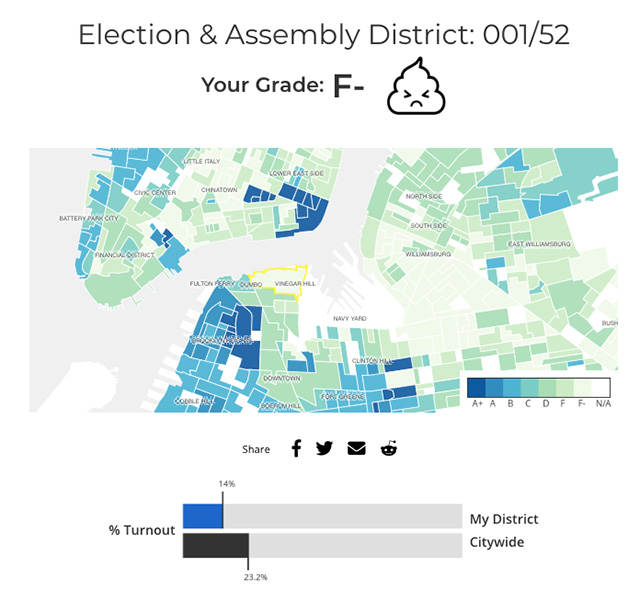 DUMBO by the East River

The "Does Your Block Vote?" map also tells you how your district ranked out of all 5681 district across the city and in your borough. There's also a fun fact how how high voter turnout was for your block during the 2016 presidential election (which was 56% at the citywide level). For example, this is how President Donald Trump's district did:

As of April 2018, there are 4,982,173 registered voters in NYC (this doesn't count a potential Taylor Swift bump as the voter registration was last Friday). Still, high registration doesn't always mean high turnout. If the 23% voter turnout number is repeated, that means only 1,145,900 people will decide whether campaign finance laws are amended; or vote on the formation of a Civic Engagement Commission to "enhance civic participation, promote civic trust, and strengthen democracy"; and if community boards should be more reflective of the community.

Take a look at the "Does Your Block Vote?" map and see what you can do to increase voter turnout. For more about the midterms, check out Gothamist and WNYC's coverage at our Elections hub—there are only 21 days until the election!

#how does your block vote
#map
#voter tunrout
Do you know the scoop? Comment below or Send us a Tip