New Yorkers already hold the dubious honor of having the worst commutes in the country, and now you can see how your miserable commute compares to others across the city: a study released this morning by the Center for an Urban Future breaks down commutes citywide, looking at commute type, time, and industry.

The study analyzed census data from 2000-2014, and found that a number of changes in commuting have occurred over that timespan: the number of New Yorkers working from home increased by 68 percent from 2000 to 2014, and the number of people working in their own boroughs increased by an average of 29 percent, with the greatest increase in the Bronx (40 percent) and the smallest increase in Manhattan (18 percent). Meanwhile, the number of jobs held by city residents hasn't changed much: just 21 percent of jobs in NYC are held by non-city residents, down slightly from 22 percent in 2000.

The average commute time citywide, according to this study, is just over 40 minutes. Unsurprisingly, residents of the Rockaways have the worst average commute times, at nearly 53 minutes, while those in Greenwich Village/Financial District have things easy at just over 26 minutes. The latter also has one of the highest percentages of people who walk or bike to work: 34 percent, topped only by people living in Chelsea/Clinton/Midtown and Stuyvesant Town/Turtle Bay.

Well over half of New Yorkers rely on mass transit to get to work, but 10 of 55 neighborhoods have a higher percentage of people who drive than take the subway. Most of those neighborhoods aren't that surprising, given that they're commonly thought of as transportation deserts: for residents of Staten Island or Bayside, Queens, commuting by car may be the more time-efficient option. 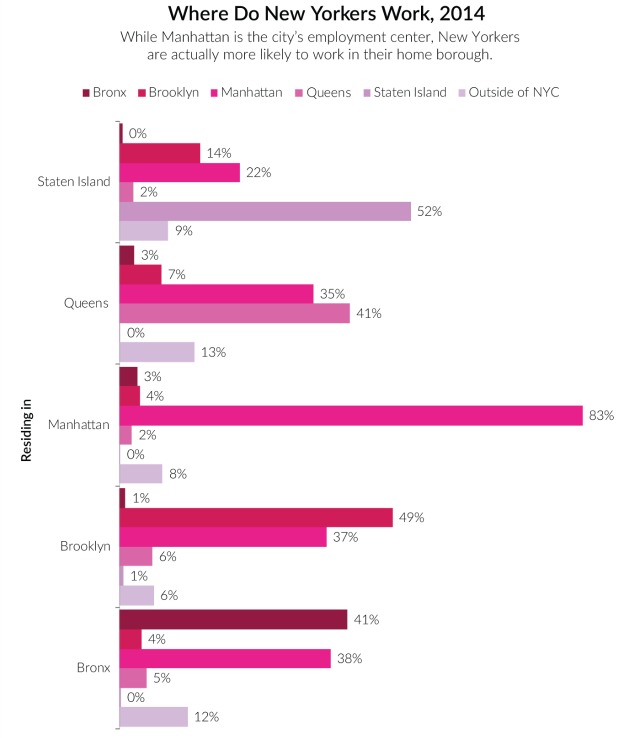 (Center for an Urban Future)

The study also offers a number of recommendations for improving New Yorkers' commutes, drawn from its 2014 report on the sorry state of the city's infrastructure. For one, the Center for an Urban Future would like to see Communications Based Train Control (CBTC) adopted across all of the subway lines, whereas currently, just the L—and soon the 7—use this more modern technology. CBTC is supposed to increase the speed and frequency of trains, though it can't keep lines from years-long infrastructural repairs.

The Center is also in favor of tolling the East River bridges to offset MTA costs, and adopting something like the Freedom Ticket to reduce the costs of taking the Long Island Railroad within the city.

If you found this report frustrating, tell your state representatives and Governor Cuomo to stop robbing the MTA of badly needed funding and figure out a way to come up with more cash for a 21st Century transit system.