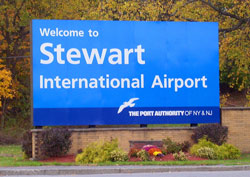 Stewart International Airport in Orange County, NY is losing one of its two major carriers--AirTran. The airline cited rising fuel costs, which are affecting all carriers negatively, as the reason for its ending of routes from Stewart. AirTran carried 315,000 passengers over the last year to Florida destinations and its Atlanta hub. In combination with Jet Blue, AirTran has been critical to the near-tripling of passengers at the airport in 2007.

The loss of one of its biggest carriers comes at a bad time for Stewart and regional air travel in general. The Port Authority took control of the airport north of NYC in 2007, hoping that it would serve as an outlet to reduce demand on Newark, Laguardia, and JFK, which are among the most congested airports in the country and top the list of flight delays. The bi-state agency is committed to spending a half billion dollars on infrastructure improvements, with the goal of having Stewart serve 10 million travelers annually and adding international flights to Europe.

While the Port Authority and legislators are in discussions with AirTran to get it to continue service at the airport, the airline's last scheduled flight out of Stewart is set for September 3.

#airport
#Airtran
#congestion
#JFK
#laguardia
#newark
#port authority
#stewart
Do you know the scoop? Comment below or Send us a Tip