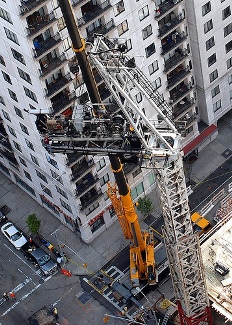 An insurance company executive, whose client owned the crane had once been repaired before collapsing on East 91st Street last Friday, said the Department of Buildings knew the crane's history. NationalBuilders Insurance Services executive vice president Kevin Cunningham said, "The DOB inspector certified that it was OK to go back to work."

While the insurance company says the 24-year-old tower crane's turntable crack was "minor," investigators suspect the re-welded crack might have given way and caused the collapse. The Department of Buildings told the Times it couldn't comment, because it didn't want to interfere with the investigation.

City officials, contractors, developers and others have been holding meetings to discuss construction and crane safety. The NY Times reported the city may consider to third-party crane inspecting, as there is in California. And the city just announced news safety measures, like construction workers will have to complete crane safety courses, restrictions on equipment (like not using the nylon strap in the March 15 crane collapse) and contractors receiving numbers to track safety.