It’s 3 a.m. on a Saturday night in mid October, on a deserted street in Bushwick, Brooklyn. Pablo and Violeta* are standing in front of a pizzeria that’s closed for the night, sipping cafè con leche and eating pan dulce, a loaf of soft sweet bread that reminds them of Mexico, their home country. It’s a well-deserved coffee break after five hours of work: Pablo collecting cans and bottles on the streets and Violeta sorting them. They’re waiting for the closing time of nearby bars and clubs, to rummage through black bags piled on the curb, looking for empty cans. Around 5 a.m. they’ll load their car and go home, where they live with two of their six children. They’ll shower, sleep four hours, and hit the streets again to go a redemption center where they'll exchange the cans for five cents apiece.

In 2017, Pablo and Violeta said they earned more than $40,000, redeeming almost 1 million items. This definitely puts them on the higher end of the spectrum of what canners—what people who make a living picking up cans call themselves—make. The odds are in Pablo and Violeta’s favor because they work as a pair and they have a car, where they store their collection instead of going back and forth to a redemption center whenever a shopping cart is full.

Listen to Francesca Berardi discuss her research on WNYC:

But most canners rely only on their own legs. That’s the case with Morena, who pushes an overflowing shopping cart to a redemption center at least twice a day. Yet she too has her well-oiled strategy to make a living with canning. The key to her work is the relationship with two building superintendents who manage fancy condos in Bushwick. On a pre-determined day and time of the week, they give her exclusive access to the basements and let her take all redeemable items. In return, Morena sorts the garbage for them, cleans the space, and shows her gratitude with small gifts that she calls tonterias, like a carton of mango juice or a box of sweets. In order to maintain her privileged relationship with these supers, Morena shows up even when she doesn’t feel well and the arthritis in her hands gets worse during the coldest days of winter. She makes about $10,000 a year, which is enough for her to survive on (she pays $200 a month for a room she shares with her grown son). 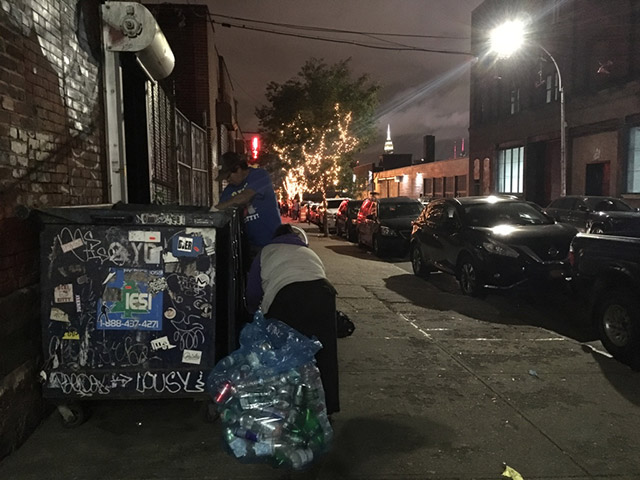 Pablo and Violeta look for cans (Photograph by Francesca Berardi)

Not all the canners are as determined as Morena, or simply not as strong or healthy to be able to do physical work for more than 10 hours a day. For the past three years I’ve been working with a community of canners—immersing myself amongst them for a journalism project—and met with dozens of them in order to understand their economy. At Sure We Can, a non profit organization founded 10 years ago, I met parents who are using canning to help pay for their kids’ college tuition. Other canners live on the streets and struggle with addiction. They’re able to scrape up what little they need to buy a sandwich and a pack of cigarettes.

For those who are poor and have a hard time finding a job, they believe canning represents a dignified way to make enough money to survive. For Wade, a 20-year-old born and raised in the Bronx, canning is a form of protest. Last year, when I first talked with him, Wade told me that he’s a self-taught web developer looking for a job in the tech field. In the meantime, he picks up cans and bottles in order to work outside an economic and social system that he feels has always been unjust to him.

There is no comprehensive data about the number and demographics of canners in New York City, but at least 10,000 people are estimated to be collecting recyclables on the streets, according to Ana De Luco, one of the founders of Sure We Can. Back in 2005-2006, De Luco, a self described “street nun” from the Basque country, chose to become a canner herself, sleeping on the streets of Manhattan’s West Side. Her mission was to understand the needs of New York City’s poorest and be able to help them better. 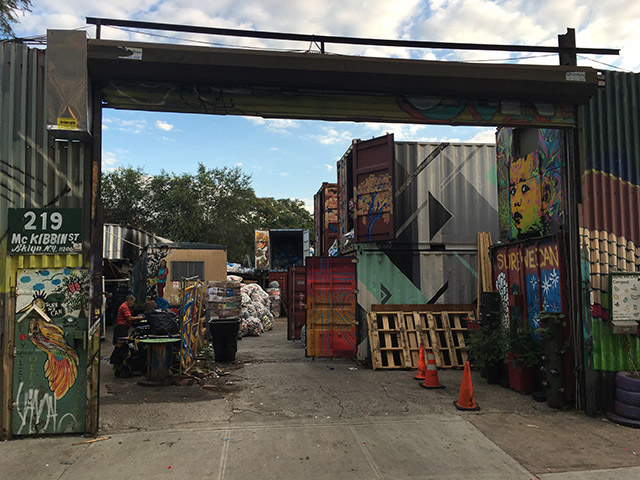 The entrance of Sure We Can (Photograph by Francesca Berardi)

The geography of canning has changed over the years.

De Luco remembers that in 2005 an established redemption center located between 52th Street and 13th Avenue in Manhattan, called We Can, shut its doors. Overnight, the community of West Side canners found themselves in desperate need of a place to redeem their collections. Reverse vending machines outside supermarkets are not an option when you have large amounts of recyclables. They are too small, and, more often than not, they’re going to be jammed

De Luco tried to find a solution for more than a year. She had contacts with people working at the UN and other NGOs, and was ultimately able to raise enough donations to start a new venture. She joined efforts with a homeless man from South Carolina, Eugene Gadsen, to open a new redemption center in Manhattan, which they called Sure We Can.

When it first opened its doors, Sure We Can was located in a storage space on 29th Street. In less than three years it had to move five times, “pushed to the other side of the river by gentrification,” De Luco says. The organization ended up in Bushwick, in empty lots rented for around $5,300 a month. 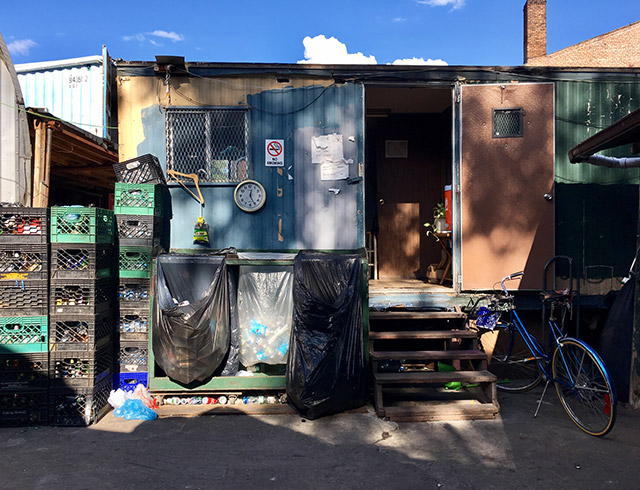 Sure We Can's office (Photograph by Francesca Berardi)

Sure We Can operates in the opposite direction. They try to give canners more than the nickel imposed by a 1982 state law known as the Bottle Bill. In fact, every redeemable item is worth potentially 3.5 extra cents, the so-called handling fee that beverage companies and distributors pay to redemption centers for sorting (cans and bottles are returned to the companies in clear bags, divided by brand, size and material.) Usually redemption centers don’t share the handling fee with the canners, but Sure We Can provides canners with the space to sort their own collection. That way, canners can earn one extra cent a piece or more—like Pablo and Violeta do—and spend time in an environment where they can share not only bottles, but also a few words, with other people. 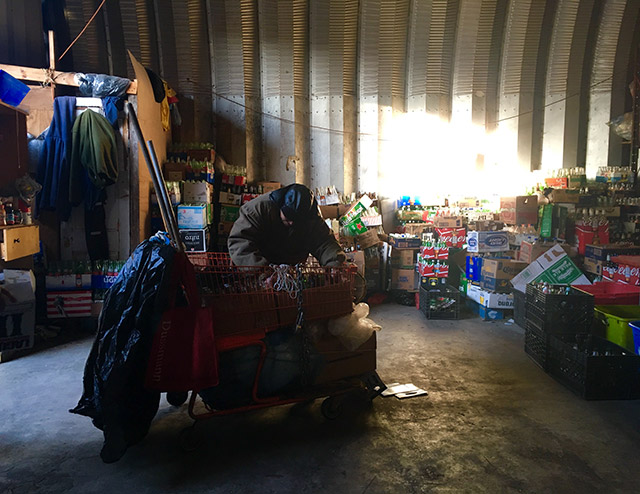 A canner (Photograph by Francesca Berardi)

Two weeks ago, a man in his forties was sorting bottles with his teenage daughter. He was patiently showing her how to divide containers by brand. She was counting out loud. A handyman, he said he had learned how to can 20 years ago, when he first arrived in the United States as an immigrant from the Sinai Peninsula. He doesn’t need to do it anymore. But that Saturday, in a family activity of sorts, he took his daughter to pick up cans and bottles, to show her a way to survive while contributing to the city’s recycling system. “I want her to see that there are resources where we least expect them,” he said. “It’s my present to her.”

*Some subjects' names have been changed.

Francesca Berardi is a New York-based journalist. Her work on the canning community, which can be seen in full at canners.nyc, was made possible by a grant from the Brown Institute for Media Innovation at Columbia University.

#bushwick
#canners
#canning
#sure we can
#original
Do you know the scoop? Comment below or Send us a Tip