Inside The Lost Jehovah's Witnesses Tunnels Under Brooklyn Heights When the Jehovah's Witnesses moved out of Brooklyn Heights over the past few years, cashing in on their now-valuable properties and moving upstate, they left behind a collection of buildings that had been their headquarters for over a century. In the decades after 1909, when Jehovah's Witnesses founder Charles Taze Russell led the religious group from Pennsylvania to "America’s First Suburb," the Witnesses assembled a series of properties that ranged from an old carriage house on Willow Street to five-story brownstones and the expansive Kingdom Hall on Columbia Heights, along with other buildings (some of which would serve as their headquarters and printing plant).

Thousands of Witnesses from across the country came to volunteer at this center, which they called “Bethel," after "Beecher's Bethel," the former home of abolitionist preacher Henry Ward Beecher that was part of the property.

Out of sight of most New Yorkers, though, was the development underground: a series of tunnels that ran beneath the streets to connect a number of the JW properties. And though the tunnels began to be filled in two years ago, their fascinating history has recently begun to come to light.

In 2017, Gothamist filed a FOIL request with the Department of Transportation to find out more about these subterranean passageways. This year, we received hundreds of pages of emails between the Witness leadership and the DOT, along with additional city records from the Municipal Archives. Those documents, along with conversations with several former Jehovah’s Witnesses and videos we were shown, offer a rare inside look at the tunnels, and provide insight into their purpose.

The first tunnel was built by the Squibb family around 1924. (Municipal Archives)

The first tunnel on the property was constructed in the 1920s by Squibb & Sons, who got approval from the Tammany-controlled board of estimate. The pharmaceutical giant sold the property at 25 Columbia Heights to the Witnesses in the 1960s, and this would become their Watchtower headquarters building. At some point, likely shortly after the sale, four more tunnels were excavated, which eventually housed offices, a grocery store, laundromats, and other services. 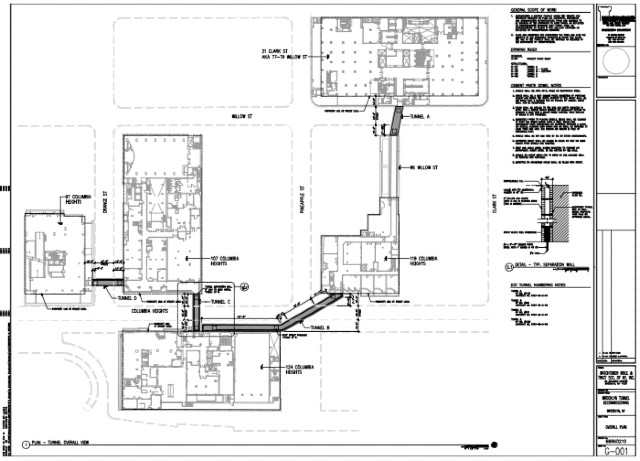 The decommissioned tunnels are highlighted in this blueprint Gothamist received from the Dept. of Transportation. (Gothamist)

"It was a little creepy" in the tunnels, Gregory Hall, a former JW who left the religion a couple of years ago, told Gothamist. He lived in Brooklyn Heights from 1989 through 1994, though he was a Witness for much longer than that. Like many, he had long yearned to move to the central office at Bethel.

"I've heard of some real strange things that happened down there" in the tunnels, Hall said, without going into detail. He did recall seeing "chain-link cages that they had their offices in. It felt weird. It was not real comfortable."

"[I thought] 'I don't even know you, I feel creepy down here, and you're bringing that up to me?'" Hall recalled. "When those doors closed down in those areas, I didn't feel comfortable. Some of those guys, they lose touch with reality."

The tunnels did serve a number of purposes, Hall said, including "privacy, security," and an easy way to navigate through buildings. "You have housekeepers transporting laundry, cooks that are transporting food. [And] it's protection so you don't have to face the outside people."

But Hall, who says he earned $3 a day (lodging was free) working in the Watchtower printing plant producing JW materials and bibles, also mentions other, more questionable uses: "They would have the elderly down there, sitting in the hallways, outside of these laundromats, straightening out hangers. These guys could barely walk or talk, and the tours [of visiting Witnesses] would come by. It was an avenue for them to be able to display their elderly, and their faithful service, supposedly."

Mark O'Donnell, another former JW who helped inform the recent Atlantic piece on child abuse within the organization, shared the above video (filmed by another JW) with Gothamist which shows a small portion of the tunnels where the commissary was housed.

O'Donnell told Gothamist that he believes the tunnels were likely helpful in not imposing upon the neighborhood too much (though it's worth noting the JW's did have stands on nearby sidewalks where they preached and passed out propaganda to passersby). "At the time there were well over 4,000 Witnesses who lived on the property," he noted. "Any time something came on the market in Brooklyn that they felt they could use, they’d go ahead and buy it. The Brooklyn Heights residents didn’t really want JWs buying all that property for a few reasons. Partially because it took it off the tax register, and it’s a little bit scary when a large religious organization starts buying everything up like that." 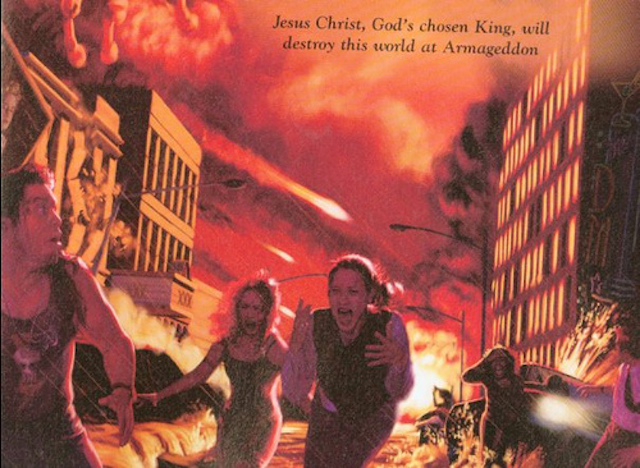 Former JW (and contributor to Gothamist) Amber Scorah, whose book Leaving The Witness is out this June, told Gothamist, "I think that a lot of the reason thousands of young Jehovah’s Witnesses (most of whom were men) volunteered to work for [almost] no pay at Bethel was because it meant you got to live in New York City." She also noted that it was "definitely frowned upon for Witnesses who worked [there] to go out and interact with the world, except for reasons of preaching."

Scorah says meals were taken in cafeterias, and as this video from the 1990s shows, those meals were likely prepared in underground kitchens.

You'll enter the tunnels around the 7 minute mark.

"There's a theory that [the tunnels were built because] they didn’t want to be visible to the neighborhood," O'Donnell told Gothamist. "I do think it’s accurate. They had upwards of 4,000 individuals, and they were swarming like ants all over the place." However, it's worth noting that there are also tunnels at the Witnesses' Watchtower Farms property in Wallkill, NY, which is much more secluded. Hall also believes there are tunnels at their Tuxedo Park, NY property.

According to emails obtained by Gothamist, the official use of the tunnels as described to the Department of Transportation (from whom the Jehovah's Witnesses leased tunnel sites beneath public roadways) was for a "pedestrian passageway and to transport supplies." The original tunnel built by the Squibbs ran beneath Vine Street, between two of the buildings in what would become the multi-building Watchtower headquarters. During the ensuing decades, the JW’s would come to control four additional tunnels connecting six different properties, stretching from Columbia Heights, which runs along the top of the Brooklyn Heights Promenade, to buildings on Orange, Pineapple, and Clark Streets. In 2016, the Jehovah’s Witnesses paid the city roughly $80,000 in total rent for the tunnels.

Throughout 2016, as the Jehovah’s Witnesses were unloading their Brooklyn Heights real estate, the group was unsure about what to do with their subterranean assets. After initially planning to leave them in place, Watchtower architect David Bean informed the DOT in early 2017 that the religious organization would be “moving ahead 100% with filling” the tunnels. That decision was reached following discussions with prospective buyers, according to Bean's emails.

But navigating the city’s tunnel-filling bureaucracy is apparently a challenging endeavor, and emails show the JW engineering coordinator growing increasingly frustrated by the speed at which the DOT was approving their plans. “I’m getting quite a bit of pressure from my construction manager and owner here at Watchtower,” Bean wrote to the DOT in February of 2017. “We’re due to be completely out of the buildings in a couple months, which doesn’t leave us much time for mobilization on the project.” 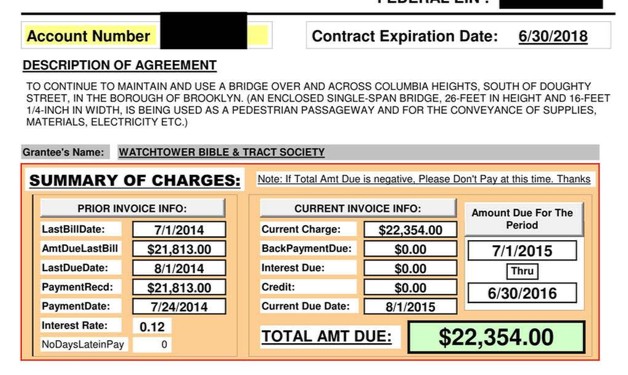 One of the bills from the Dept. of Transportation. (Gothamist)

In October of 2017, following a delay in the city’s confirmation that a tunnel had been filled, Bean pressed again: “This is becoming rather critical since it’s linked to the sale of the adjacent 15 story building at 21 Clark Street.” The DOT rep quickly confirmed the deactivation. A few weeks later, the Jehovah’s Witnesses closed on a $200 million sale of that building to the private equity firm Kayne Anderson Real Estate Advisors, which plans to turn the property into “luxury senior housing.”

Emails between the DOT and the Jehovah’s Witnesses also shed light on how, exactly, one closes a network of semi-secret tunnels. The plan, painstakingly negotiated between the DOT and the religious group, called for the tunnels to be hydraulically filled with sand and sealed with either a steel barrier or concrete wall, depending on the potential for corrosion. Determining the load-bearing capacity of the soil beneath the tunnels also prompted several exchanges between the city and the group’s engineers, as did the matter of pouring concrete into the tunnels without disturbing the roadway or sidewalk above.

In the end, the group resolved to fill some of the tunnels via a double-door metal hatchway on the sidewalk of Columbia Heights—an entry point that “has been in place for many years, and will remain as such after the tunnel filling is completed,” Bean wrote—while using a basement access point for the remaining passageways. Openings were left at the ends of each tunnel for a visual inspection, and cameras were installed to monitor the progress of the pouring.

We reached out to that Watchtower architect, David Bean, for a little more information about the passageways—specifically how and when they were built—but Bean told us he needed clearance from the JW's Office of Public Information. That office has declined to comment (and presumably, is not allowing Bean to answer our questions). And so, as with most stories about underground complexes, these tunnels still have a little bit of mystery buried with them.

#brooklyn heights
#jehovah's witnesses
#tunnels
#original
Do you know the scoop? Comment below or Send us a Tip