This morning the Ford motor company convened a very strange panel at the advertising agency Ogilvy. Its purpose was to understand the mysterious "millennial" generation, and why they don't seem too keen on buying cars. To accompany the discussion, Ford distributed a colorfully illustrated pamphlet entitled "Millennial Misconceptions," which featured pull-quotes from a "Generational Expert" and cartoons proving that inside every diffident millennial hipster there lurks a latte-swilling slave to social media. As you can see by the sample above, this cleared some things up right off the bat:

The Reality: Twenty-somethings are ACTUALLY savvy consumers of music units and cutting edge technology, totally primed for the 21st-century workplace, and about to come into some serious buying power, thanks to their social media skills, interconnectivity, diversity, and blinkablompoovity let's just make up words to increase our billable hours to Ford.

Does "The Reality" also sound a bit like A Myth (you know, the one about the Legendary Steaming Towers of Corporate Bullshit)? Hopefully not for Ford, which convened this group of well-off white men from the tech, marketing, and financial sectors to explain these inscrutable millennials, and why, shortly, they will surely begin to spend money (that they totally have!) on automobiles. 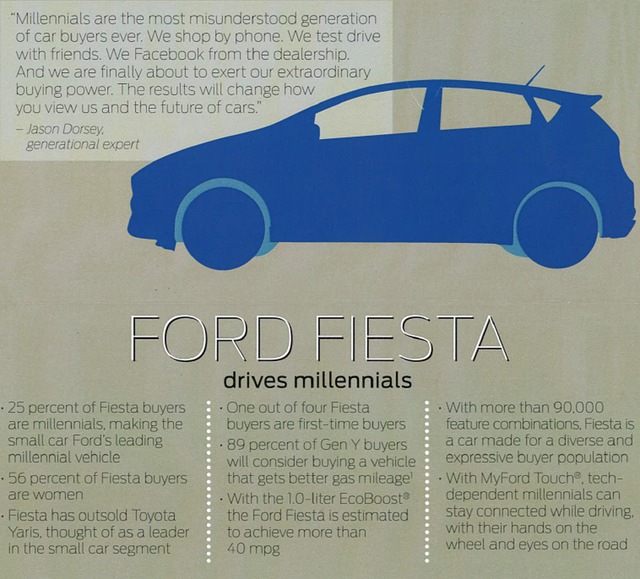 Jason Dorsey, a management consultant, marketer, and self-proclaimed "Generational Expert" sought to explain the buying habits of the millennials, which, actually, can't really be explained, because it turns out "millennial" is just an insipid generalization. Sorry to disillusion you.

"Advertisers are trying to reach everyone with the same message, when they are too dispersed to all hear the same thing," Dorsey pointed out. You know, it's almost as if the term "millennial" is just an empty catchphrase tingling with vague connotations but doesn't actually mean anything in "The Reality." In fact, isn't it about time we all accept that "generation" is probably the most banal and arbitrary form of classification there is? (No disrespect to "those people in marketing" who get paid to shove made-up labels down consumers' throats.)

While it became clear that the panelists were instructed not to actually talk about selling cars (but rather the social media and purchasing habits of what is an essentially imaginary group), they did provide some insight into what would make Generation Y into car-buyers: credit cards!

"It's difficult for young people to get credit cards, because we're not even allowed onto college campuses anymore," moaned David Rabkin, the senior vice president of consumer lending products for American Express as he lamented that the government no longer encourages young people to build up dangerous amounts of credit card debt. "I would love to give kids who are supported by their parents credit cards," he continued, stopping just short of twirling the ends of his sinister invisible mustache.

Unfortunately for the oil industry and other global warming investors, none of the speakers could give any insight into whether millennials will buy cars anytime soon. But everyone seemed to agree that once they magically lock down stable jobs and inevitably move to the suburbs with that perfect guy they met in Murray Hill, they'll get with "the reality" and buy a car.

So with a generation deeply indebted, extremely precarious, and moving into cities, what's the answer? What will actually make millennials buy cars?

The Ford Fiesta, obviously. Because it lets you play mp3s without having to take your hands off the wheel. Millennials just love crap like that—the Generational Expert told us so! 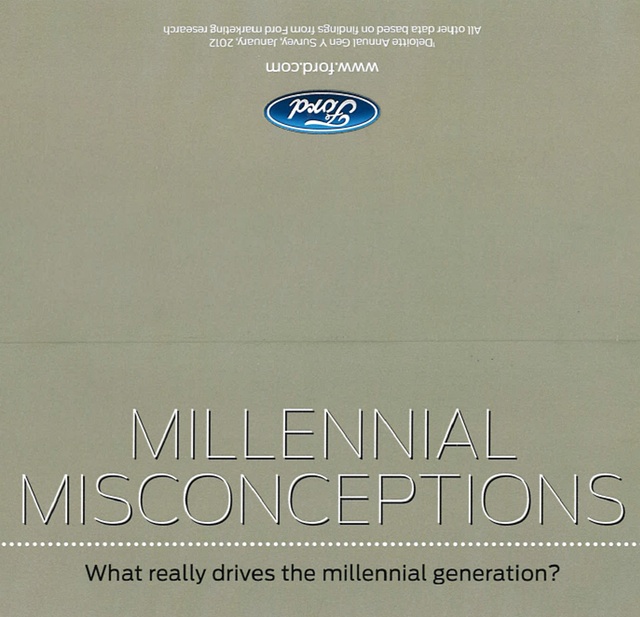 #american express
#cars
#ford
#Millenials
#original
Do you know the scoop? Comment below or Send us a Tip