Inside Julia Salazar's Triumphant Brooklyn Primary Party: 'It's Time For Change Around Here'

Salazar, 27, was declared the winner with 58 percent of the vote less than an hour after polls closed at 9 p.m. It was a triumphant end to a campaign checkered by a seemingly endless parade of bewildering micro-controversies regarding her official biography.

The Well, a bar straddling the border between Williamsburg and Bushwick, was packed with supporters by the time Salazar made her entrance around 9:15. When word spread that the New York Times had called the race for Salazar, the crowd roared its deafening approval, cheering her name and chanting "si se puede" during victory speeches.

@SalazarSenate18 #JuliaSalazar wins the race!! The inquiries into her background, Judaism and the latest outing as alleged victim of sexual assault totally backfired ! pic.twitter.com/Zb6fz9LGft

It was a bright spot for progressives, for whom the New York primary presented a mixed bag. A trio of top-ballot candidates who campaigned together—gubernatorial hopeful Cynthia Nixon, Lieutenant Governor contender Jumaane Williams, would-be Attorney General Zephyr Teachout—all lost to their more establishment Democratic opponents. But races for State Senate in NYC were rife with upsets, with most former members of the Independent Democratic Conference, a clutch of Republican-aligned Democratic incumbents, ousted.

"This was a brutal race because they knew, they knew that we were a threat to the concentration of wealth and power in this state," Salazar said in her speech, referring to her critics. "This is a victory for the oppressed, the marginalized across the state of New York."

Salazar's campaign attracted attention well outside North Brooklyn this summer, picking up considerable momentum after 28-year-old Democratic Socialist Alexandria Ocasio-Cortez defeated incumbent Joe Crowley in a June primary. Like Ocasio-Cortez, Salazar won the endorsement of the Democratic Socialists of America, but seeming inconsistencies in her biography and politics drew criticism as election day drew closer. At times it seemed that Salazar, a political neophyte, was ill-prepared for the scrutiny typically faced by high-profile candidates, and a series of mini-scandals dogged her campaign throughout late summer.

Two days before the election, far-right website The Daily Caller maneuvered Salazar into publicly identifying herself as a survivor of sexual assault. (A dozen other women subsequently came forward with comparable stories about the accused, David Keyes, foreign spokesperson for Israeli Prime Minister Benjamin Netanyahu. Keyes has since stepped down.) The week before, a tabloid buzzed about Salazar's alleged "affair" with Mets legend Keith Hernandez, and the theft and extortion efforts it says followed; Salazar countered that the charges had been dismissed and that she'd filed and won a defamation suit against Hernandez's wife.

The public dissection of Salazar's biographical minutiae have seeded skepticism in the media, despite her ability to explain them: How legitimate is her Jewish identity? (People who know her say very.) How can she claim a working class background when she was born to a relatively wealthy family in Miami? (Salazar has clarified that she spent her early childhood shuttling back and forth between the U.S. and Colombia, her father's home country, and despite her mostly comfortable middle-class upbringing, her family has attested to periods of financial difficulty.) How can she call herself a Democratic Socialist, when she registered as a Republican as recently as college? How can we trust her with reproductive rights, when she spearheaded an anti-abortion group during that same time?

Whatever her previous politics, Salazar says she now stands firm on her advocacy for reproductive justice, and took the notable step of adding to her platform sex worker protections and universal, long-term healthcare, regardless of immigration status. As for the voters, some waved away unflattering reports as quibbling distractions that paled in comparison to her opponent's track record. In his tenure, Dilan has accepted over $325,000 from various members of the real estate industry. Critics say he's used a Republican majority in the Senate as a fig leaf to pose as left-leaning without the consequences of passing legislation that would upset his big money donors. 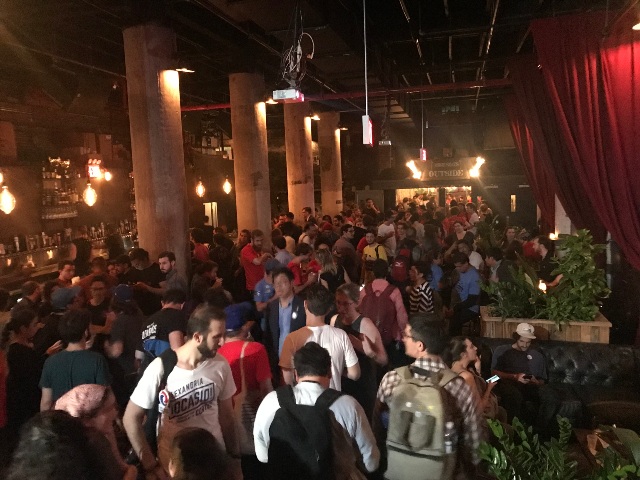 Inside The Well (Claire Lampen / Gothamist)

One watch party attendee I spoke with summed up the collective mood nicely, describing Dilan as "a hard object [standing] in the way of change."

Salazar also drew support from sex workers, running openly in favor of the decriminalization of sex work, and hosting a special voter canvass event in August led by sex workers and allies.

Lola Balcon, a 23-year-old sex worker rights organizer, called Salazar "the first-ever vocal advocate for sex workers' rights to win an election, and an incredibly competitive election at that."

"Today was one giant step in the fight against stigma and putting this issue on the map for New Yorkers and Americans," Balcon added. "We look forward to working with Julia to pass policy that improves the lives of people who trade sex by choice, circumstances, or coercion in the next legislative session."

Local resident Alexander Otero, 53, burst ebulliently into The Well just after the race was called for Salazar. "I was born here, I was raised here, and I'm never going to leave here," Otero declared. "Because these people fuckin' made it better. I know Dilan personally, I know the whole Democratic establishment here, alright? And I've been rolling with them since I was a kid. But it's time for change around here." 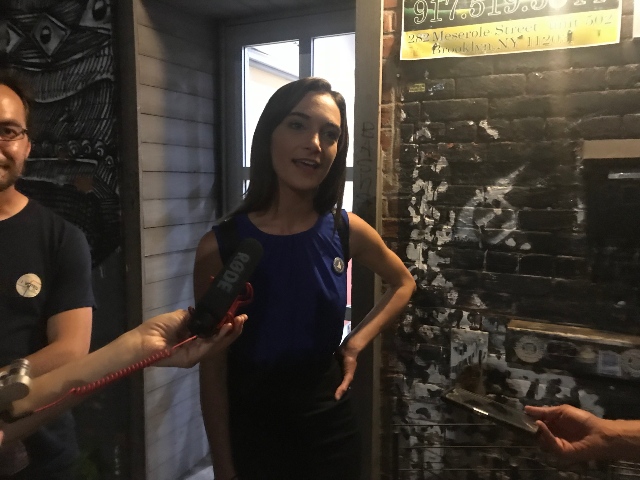 Standing at the corner of Meserole Street and Waterbury Street, outside a graffitied building, Salazar agreed. "Voters are smart and they are interested in voting for candidates who they know will fight for them and for their interests," she told reporters. "Voters know that we, from the outset, ran this campaign on the issues."

Salazar concluded that real estate—Dilan's most salient fault-line—was a decisive issue for her rapidly gentrifying district, where everyone "is affected by the affordable housing crisis" and where tenants need an advocate who will fight for them to stay in their apartments.

Salazar is not facing a Republican opponent in November's general election.