Inside A Legalized Weed Schmoozefest, Where Entrepreneurs Have High Hopes

“This is REAL different than government!” said Jason Starr, bounding onto the stage, backed by hiphop, at SubCulture, a small subterranean performance space in SoHo. “I can't even see who I'm talking to. Maybe that's a good thing.”

An assistant counsel to New York Governor Andrew Cuomo, Starr was at the networking forum “Cannabis + Licensing,” on Tuesday night, addressing about 200 people eager for an update on marijuana legalization in New York.

Starr, who sported a bushy beard, bald head, crimson crewneck and gray blazer, helped write the governor’s proposed legislation, and he’s now hammering it out with state lawmakers. But he wanted the crowd to know he wasn’t just some faceless Albany bureaucrat.

“I like to think of myself as the most ungovernmenty government person there is,” he said.

The proposal wasn’t included in the state budget deal reached over a week ago. Cuomo said there was broad agreement but they needed more time to work through the details. At issue: how to share the tax revenue, who will get licenses and how far exactly the decriminalization of weed will go.

Drug policy advocates and predominantly black elected officials are working to ensure the new rules have social and racial equity at their core. That means investing a sizable chunk of the tax revenue into poorer communities adversely affected by the decades-long “war on drugs,” and guaranteeing people of color had a hand in the new industry from the get-go, with licenses and support to compete against out-of-state competitors and large corporations.

Starr, who is black and previously worked at the New York Civil Liberties Union, touched upon this when he talked about the “architecture” of marijuana licensing and regulation.

As with other speakers, Starr’s spiel was somewhere between a pep talk, a Gospel sermon and a TED Talk.

“There's a lot of different ways that this industry is going to grow, that it has grown and will continue to grow,” he said. “And regardless of what skills and talents and innovations you bring, there is a place in this space for you that's going to be recognized and that's going to be elevated and celebrated.” 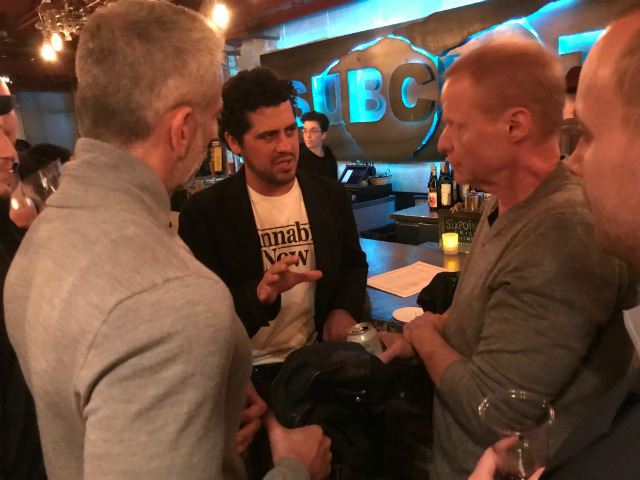 The informational mixer was organized by Revel—one of several young companies that organize pot-oriented professional socializing sessions like this throughout the metropolitan area. A mix of men and women, representing a range of ages and racial identities, sipped local microbrews and noshed on Thai noodles before the sit-down portion of the evening.

“The schmoozing is good,” said Jyl Ferris, a marketer with sparkly costume jewelry. “But you always have to separate, try to find the people who are going to be beneficial for your career, maybe you’ll meet someone who might need your services.”

Ferris, who’s worked for everyone from Perrier to Condé Nast to a Jewish-themed “cannabis wellness brand,” said she hadn’t yet made any great new contacts — but the night was young.

Many had bought $50-65 tickets for the sold-out event because they’re considering a career change and think cannabis might be the answer.

“I want to be informed about how to be involved and make sure we create a sustainable cannabis industry, so that [marijuana] helps our community instead of hurts it, as it has for so long, and brings some healing to our city,” said Tara Crichlow, a fitness trainer. Crichlow, who is black, also said she was interested in social justice activism. “I’m testing the waters.”

Crichlow and others said they were drawn to marijuana for the leafy drug’s ability to enhance “wellness” and “creativity.” And if it’s long thrived in New York as an underground market, they reasoned, the sky’s the limit for weed as a legal pleasure.

“Through college I smoked, and I was like, 'This is a great market.' and after college I went to California and Las Vegas, and business is booming there, so why not jump into a market where it’s just emerging?” said Raven Wise. The 27-year-old from Jersey City works in the marketing division of a publishing house but dreams of opening a social lounge and cannabis dispensary.

“It’s always nice to make contacts and have those face-to-face interactions,” she said. “You try to find a point person who can guide you, even if it’s just to answer a question or two here or there.”

But while many in the crowd were looking for a way into the weed biz, John Sullivan joked he was looking for an “exit”—venture capital lingo for a payoff.

“I play the stock market, I invest in private companies, I watch the cannabis industry, and I’m trying not to lose too much money,” he said, with a laugh. “I’ve got a lot of capital placed out there, I’d love to get an exit every now and then. They’re few and far between in this industry at the moment, but I’m hopeful.”

The retired AT&T executive said he invested in several cannabis companies — both ones that “touch the plant,” like growers and sellers, and ones that don’t, including companies that make dedicated software systems or smoking accessories. But he wanted to make sure he works with as many “for lack of a better term, stoners” as possible.

“I’m not so sure we want to give up the culture,” he said. “The culture of marijuana is a wonderful thing, and with all the big tobacco and big pharma and big alcohol Wall Street coming in, they’re coming in with their own ideas, so we’re going to try to defend our culture, the Woodstock generation, as much as we can.”

Starr, Cuomo’s aide, also spoke about that culture — and how government licensors and regulators needed to learn from it. But what the audience really wanted to know was how close New York was to legalizing marijuana?

As Starr launched into his finale about train-has-left-the-station inevitability, Ferris and the man sitting next to her, moved by the call-and-response participatory vibe and itchy for some actionable intel, shouted, “When? When?”

They got no answer.