Inside A Bushwick Punk Rock Fundraiser For Bernie Sanders

Last night at Bushwick’s Shea Stadium, sweat-drenched Brooklynites showed up for more than the opportunity to mosh. The “Weekend at Bernies” event, hosted by Bushwick Berners, doubled as a rock show—with sets by Guerilla Toss, Mannequin Pussy, Nine of Swords, and Nonsense—and fundraiser for Vermont Senator and Democratic candidate for President Bernie Sanders. Stumble a few feet out of the pit, and you’d land yourself at a table with voter registration cards and a sign-up sheet to volunteer with the campaign, plus lots of “Bernie swag,” including a home-printed “Bernie is Bae” t-shirt.

The mash-up might seem strange, but Sanders is about as punk rock as a seventy-four-year-old senator can be. He’s an anti-war socialist known for standing up to corporate greed, and even has a bit of his own DIY cred. Back in the ‘80s when Sanders was mayor of Burlington, VT, he and his wife opened an all-ages venue that’s still operating to this day. The spot, called 242 Maine, got an on-stage shout-out from Nine of Swords, and has hosted performances by Fugazi and Operation Ivy.

“When he was our age, he was kind of involved in a very similar setting where music and art were the main focus of a lot of people's lives,” Mannequin Pussy’s Marisa Dabice told us. She, like others, also referenced his no-bullshit (punk rock, if you will) authenticity.

“He’s the only candidate that when he opens his mouth to say something, my first thought isn’t immediately bullshit or that he’s reading a script that’s been written for him by lobbyists and corporations.”

The show sold out of its 250 available tickets. Combined with Bernie swag sales, the evening netted an estimated $2,000 for the campaign.

Performers stressed the importance of registering as a Democrat to be able to vote for Sanders in the primary.

“If you’re like me, you are probably registered to vote but registered as an independent because neither side has ever fucking swayed you in any way, has never made you think anything other than bullshit when they’ve opened their mouths,” Dabice said from the stage, “You need to register as a Democrat. That’s really the only vote that’s going to matter this election season, and if we lose it then we have fucking lost it, then we are an oligarchy, and that’s it.” 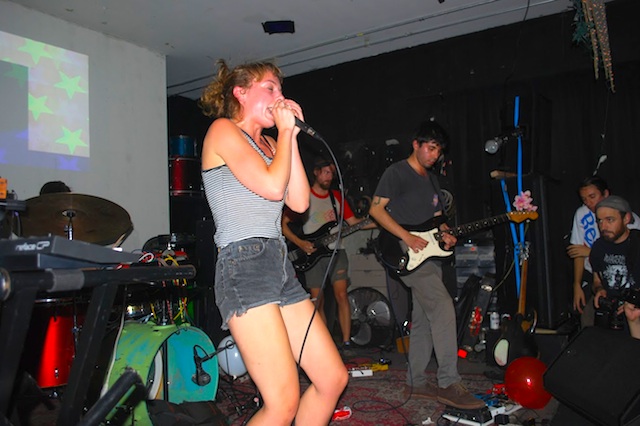 Jon Fuhrer, who organized the event, said the show gave fans who might not be politically active an opportunity to engage, and Bernie supporters a chance to find “like-minded people who share their interests.”

“We do events like this not just to raise money, but really to get people activated for the campaign, to get them on the ground,” Fuhrer said, stressing that Sanders is more liberal and reliable than his contender Hillary Clinton.

“She’s long been a corporate-aligned Democrat, Democrat in name only,” Fuhrer said, adding that her “corporate interests” don’t align with “the interests of most working families in this country.”

Fuhrer pointed, as an example, to Clinton’s instrumental role in expanding the prison-industrial complex she now claims an interest in reforming.

Guerrilla Toss’s Cassie Karlson said she supported Sanders because of his support for abortion access.

“Bernie Sanders is sick because he’s all about women’s rights,” she said, “It’s so fucked up that people actually even thought of defunding Planned Parenthood. The concept of someone not having a choice on whether or not they’re pregnant is so insane." 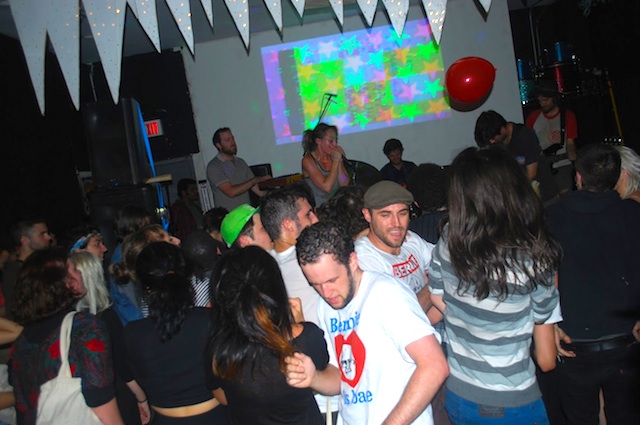 Twenty-one-year-old Thomas McCaffrey, a New School jazz student, called the Sanders fundraiser a “great plus,” adding that “it made me like the bands even more.” McCaffrey noted that, like Mannequin Pussy’s Dabice, he is registered as an independent but needs to change to a Democrat to be able to vote for Sanders in the primary.

“I like that he doesn’t take funding from giant corporations, and he wants to keep college [tuition] really low,” McCaffrey said, “If he kept his promises somehow, if he could get all that to come through, that would be fucking awesome.” He planned to change his party-affiliation after the show.

Another attendee, twenty-three-year-old Taylor Stone, told Gothamist she had participated in a Bushwick Berners event before, and showed-up to support Sanders, but stayed for the music. “I think it’s awesome to see all these young people like rallying for Bernie. I’ve never been a part of something like this. It’s really unique to this neighborhood, I think,” she said.

Charlie Dore-Young, who is 22, said he had seen every band but Nine of Swords “like a million times,” and wouldn’t have come if it weren’t a Sanders fundraiser.

“Out of everyone whose ever made a crack at it, he’s actually going hard on the right issues and speaking his fucking mind, not really holding back,” Dore-Young said. He emphasized Sanders’ support for health care reform, his anti-war stance, and economic policies that would reduce “this huge disparity between the lower and middle class.” He, too, registered as a Democrat at the event.

“Sanders has hit a nerve, and a lot of people feel like he’s one of the only politicians they’ve ever seen that have actually spoken truth to power and that have integrity and track record to back up what they’re saying,” Fuhrer added, “So we use events like this to really get people engaged, involve, and out into the community, to actually talk to voters who have not heard about him and get him outside of the echo chamber.”

Fuhrer, who hit the pit and crowd-surfed during Guerilla Toss’s set, was happy about the event’s turnout.

“I’ve never been to a political show with a mosh pit like that,” he told us. “People fucking threw down.”