The NY Post, our nation's last bulwark against a rising tide of vulgar sensationalism and lowbrow pandering, has once again earned its reputation as a standard-bearer of Good Taste and Moral Rectitude. Today's front page story calls the public's attention to one of our society's greatest ills, the "selfie," a depraved craze that has diverted Americans' attention away from uplifting photography subjects, such as powerful female leaders and heroic local sports fans, making the masses self-absorbed and slothful. And, sadly, insensitive.

A NY Post reporter was at the scene of an attempted suicide at the Brooklyn Bridge yesterday morning—heaven knows the tabloid of record had no intention of publishing lurid photographs of the incident, but it goes without saying that one man's overwhelming despair is solidly in the public interest, and the Post certainly intended to cover his tragic death with the utmost delicacy. Fortunately, the Post was spared the burden of reporting such grave news: rescuers coaxed the poor soul away from the edge of death. There was, mercifully, nothing to report.

But then! Oh, then! The Post's Man on the Suicide Beat spotted one callous bystander under the bridge trying to turn the narrowly-averted tragedy into a crass spectacle by taking a photograph. With her face in the frame. The Post knew what it had to do. The Post documented her irresponsible coverage of tragedy and featured her on the front page, instantly turning her act into an indelible symbol of society's decay:

The shot of the unidentified man — who was saved by officers — has instantly earned a place in the rogue’s gallery, not far behind Anthony Weiner’s infamous crotch shot and Amanda Bynes topless breakdown photos.

And if appalled readers needed any help recalling which selfies belong in said rogue's gallery, the Post offers a handy sidebar link guiding you to their 22-photo article "Worst Selfies Ever." (Sources say the tabloid is donating all advertising revenue generated by that story to Selfies Anonymous.)

Yet for all its efforts to elevate the deplorable standards of the voyeuristic masses, it seems that some NY Post readers can't shake their left-wing cynicism. From the article's comments, an intemperate and misplaced chorus of condemnation arises: 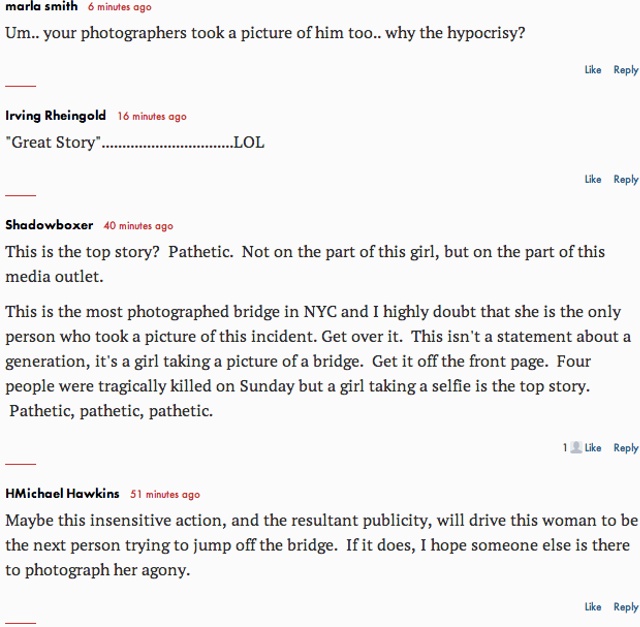 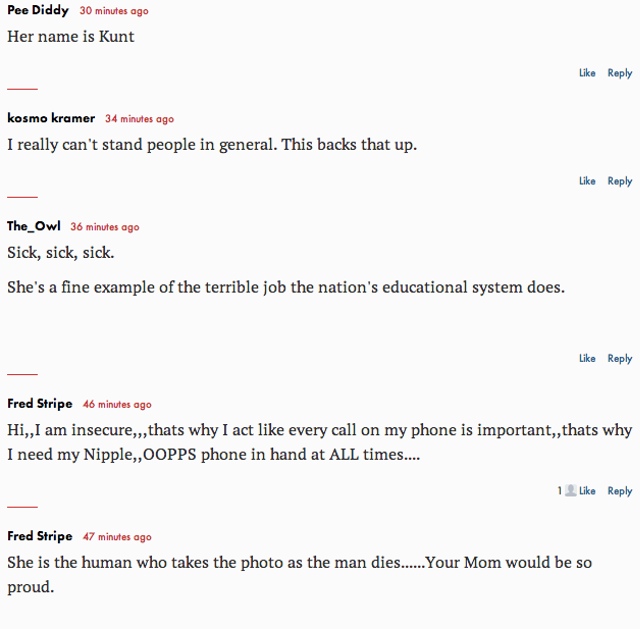 So watch out next time you treat an unfortunate incident with anything other than utmost tact—the NY Post isn't going to stand for it. 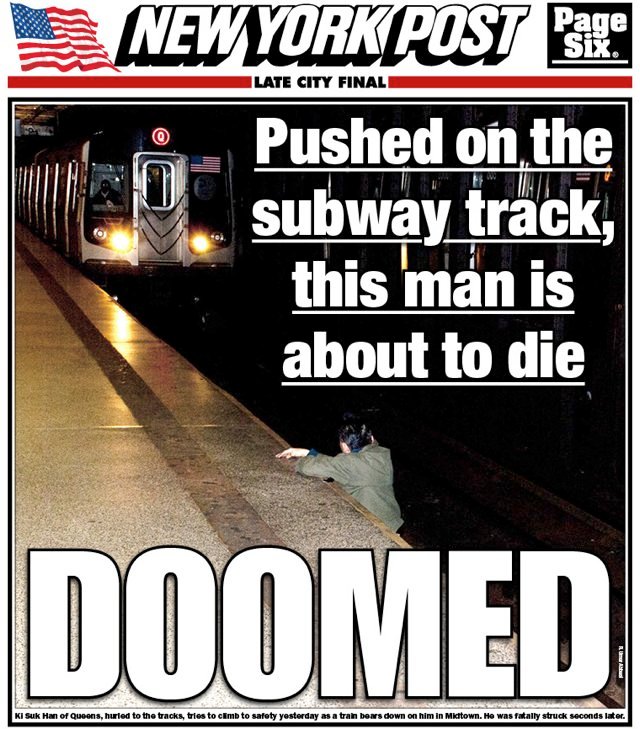 #brooklyn bridge
#ny post
#selfies
#suicide
Do you know the scoop? Comment below or Send us a Tip