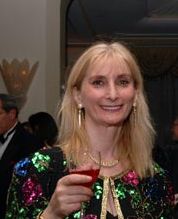 Katalin Pota (pictured), the actress who played Tony Soprano's housekeeper Lilliana, has been ousted from her Williamsburg loft on Grand Avenue. The building she lived in is owned by Simon Taub, the man who built a wall in the middle of his Borough Park mansion to separate himself from his wife.

To rewind a bit, Pota was assaulted back in 2001 in New Jersey while trying to protect a friend from an attacker; the incident landed her a broken right arm, lacerations to her face, legs and torso and torn ligaments in her knee. The state has been subsidizing her rent since. Last year Pota signed an agreement (which she now says she signed "under duress") in Brooklyn Housing Court saying she would move out after the Health Department stopped subsidizing her $1,300 rent. Now she's been tossed out because of a new policy that "bans payments to buildings with violations or without certificates of occupancy."

Turns out Taub doesn't actually have a certificate of occupancy for the building, and according to the Buildings Department he owns about 40 illegal residential rentals and owes $68,000 in fines.

Pota claims Taub had threatened her, something that he claims was an accusation provoked by his wife to make him look bad; he says he just wanted the rent. Now Pota has been "homeless" since May 14th; she says "This is endangering the welfare of a disabled person. I need a subsidized space to recover. I am an artist, I want to recover. I worked all my life."

#brooklyn
#health department
#injured
#Katalin Pota
#Simon Taub
#sopranos
#williamsburg
Do you know the scoop? Comment below or Send us a Tip