Infographic Shows How Much Power In Washington Skews Toward Men

by Clarisa Diaz and Karen Frillmann

If the looming midterm elections didn’t have women voters fired up enough, the nomination of Brett Kavanaugh has put them over the top. A record-breaking number of women are running for office this year, as they did in 1992, and recent polling shows the GOP losing ground among female Republican voters. As the Kavanaugh nomination to the Supreme Court continues to roil the Senate, one can't help but wonder about how it might be different if more seats were held by women.

There is a sense that very little progress has been made. In a state that prides itself on being a leader in progressive politics, we’ve never had a female mayor in New York City or a female Governor in New York State. Now the country finds itself looking head on into the face of power... the kind of power that in this moment feels immutable. Like it's just there and always will be.

A male gender identity holds the kind of power that is on display in our Capitol today. In fact, it has for a long time—just take one look at this data visualization. It tells the story of just how much women have been underrepresented in U.S. history. 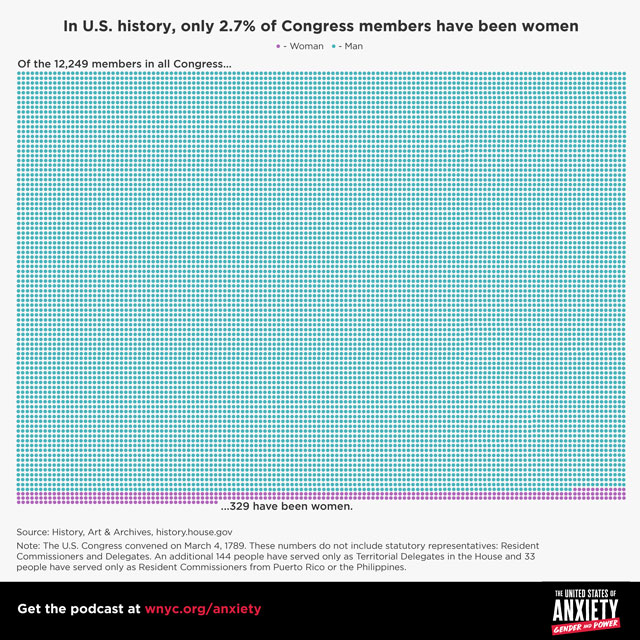 We are just weeks from an election. It is, increasingly, conventional wisdom that this will be a “wave” election—a big, partisan shift toward the Democratic Party. It’s more accurately described as a wave of women (and some men) who are no longer taking male power for granted. This election could well make history, and not because of policy or ideology, or even any one person—but because this is a moment in which we are finally calling the question: Do white men still have a singular claim to real power in our society, in our politics?

To learn more about how we arrived at this moment, check out The United States of Anxiety: Gender and Power podcast from WNYC Studios.

#midterms 2018
#united states of anxiety
#original
Do you know the scoop? Comment below or Send us a Tip