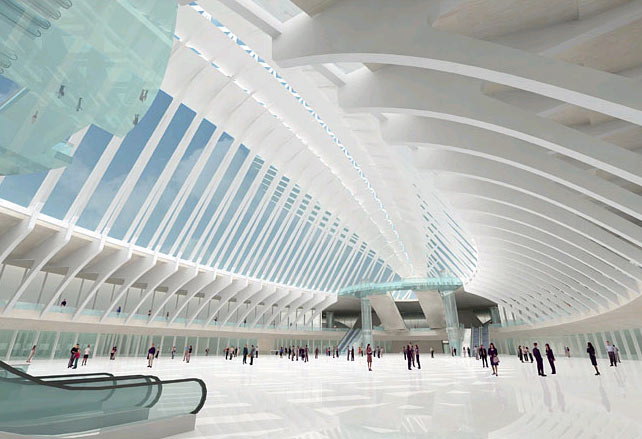 Of course: Because of budget concerns that could be hundreds of millions in overruns, the Port Authority is looking at ways to save money on the World Trade Center transportation hub design. But while the NY Times initially frightens those of you (and us, frankly) who have fallen in love with Santiago Calatrava's design with the words "the Port Authority has begun preparing plans for a more modest alternative," there is this:

In no case, [PA executive director Anthoy Shorris] said, would the hub lose its aboveground aesthetic signature: an elliptical, ribbed, winged structure that Mr. Calatrava has likened to a bird taking flight: a potent symbol of rebirth at the site of the terrorist attack of Sept. 11, 2001.

“We’re committed to that as an important part of the downtown Manhattan landscape,” Mr. Shorris said.

Whether or not that "aesthetic signature" is downsized is unknown, though. The Port Authority will look at ways of lowering the costs of underground elements (more columns, simpler engineering) but the problem is that construction cost inflation has outpaced engineering innovation.

Below are a few renderings of what the hub is envisioned to be (some designs have been somewhat modified to be "blast-resistant"), complete with a roof that can be opened for ventilation and light. Calatrava has said he wanted the center be feel full of "life, lightness and hope.”