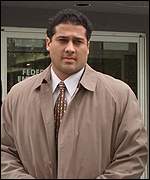 So how many years should a police officer spend in jail for sodomizing a handcuffed suspect with a broomstick? Justin Volpe, the cop who was convicted of torturing Haitian immigrant Abner Louima in a Brooklyn precinct in 1997 and who has been behind bars in a federal prison for nearly 12 years without any chance of parole, is petitioning the Justice Department for a reduced sentence. He's currently sentenced to 30 years, but letters from family, friends, and a priest pleading for leniency have been sent with his petition. (In 2004, GQ tagged along with Volpe's father, a retired NYPD cop, during depressing visits with his son.)

One sympathetic friend tells the Post, ""Just[in] was a wonderful kid who used to feed the homeless on Thanksgiving. What happened that day was 30 seconds of something that was unspeakable, horrible. But isn't 12 years enough?" New York officials say the average incarceration of a violent offender in state prison is 7½ years, and murderers serve an average 24 years. But the judge in Volpe's case sentenced him under a federal guideline that allows harsher penalties for cops. The request is currently being considered, and you can bet this year's alleged NYPD sodomite is watching the outcome of this very closely.