Villainous pharmaceutical troll Martin Shkreli has been arrested: Bloomberg News reports that federal agents apprehended him "at his Manhattan home early Thursday morning on securities fraud related to a firm he founded." Update: The feds say he was basically running a Ponzi scheme.

While Shkreli, the 32-year-old CEO of Turing Pharmaceuticals, became reviled for hiking up the price of a drug from $13.50/pill to $750/pill, the arrest is not related to that. (Or this.) According to CNBC, "The securities fraud probe of Shkreli... stems from his time as manager of hedge fund MSMB Capital Management and CEO of biopharmaceutical company Retrophin Inc, a person familiar with the matter said." More from Bloomberg:

Prosecutors in Brooklyn charged him with illegally taking stock from Retrophin Inc., a biotechnology firm he started in 2011, and using it to pay off debts from unrelated business dealings. He was later ousted from the company, where he’d been chief executive officer, and sued by its board.

In the case that closely tracks that suit, federal prosecutors accused Shkreli of engaging in a complicated shell game after his defunct hedge fund, MSMB Capital Management, lost millions. He is alleged to have made secret payoffs and set up sham consulting arrangements. A New York lawyer, Evan Greebel, was also arrested early Thursday. He's accused of conspiring with Shkreli in part of the scheme.

Retrophin had sued him for missing funds, but he denied the accusations, "Every transaction I’ve ever made at Retrophin was done with outside counsel’s blessing," and also said, "The $65 million Retrophin wants from me would not dent me. I feel great. I’m licking my chops over the suits I’m going to file against them." 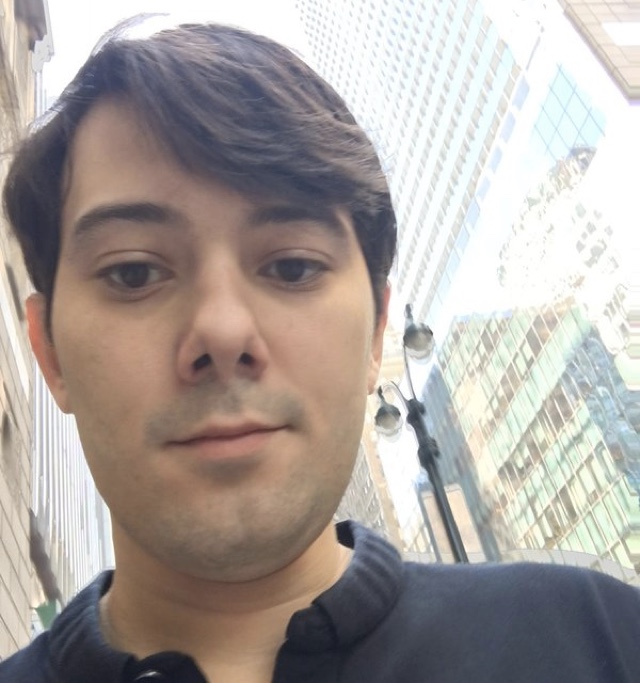 Shkreli recently announced another massive price hike of a drug.

Yesterday, in an interview with HipHopDX, Shkreli expressed a desire to bail out Bobby Shmurda, the rapper currently imprisoned for the past year in a drug trafficking and murder case. The living embodiment of late capitalism's most revolting tendencies is also into hoverboards:

"THEY SEE ME ROLLING..." pic.twitter.com/D1mDBEeZMq

Update: Reuters reports that it "witnessed Shkreli's arrest at the Murray Hill Tower Apartments in midtown Manhattan. Law enforcement including Federal Bureau of Investigation agents could be seen escorting Shkreli, who was wearing a hoodie, into a car." Sadly, there's no video. Yet.

We asked publicist Allan Ripp, who had been representing Turing on the pricing controversy, for comment on the arrest. He told us that his firm is no longer working with Turing, adding, "However, if asked, I would only have positive things to say about him and am very sorry to see news reports of his arrest."

Shkreli, the son of Albanian immigrants, grew up in Brooklyn and attended Hunter College High School and Baruch College. He also interned for CNBC's Jim Cramer's hedge fund at age 17. Cramer, though, is not very pleased with Shkreli:

@Martinshkreli was never my protege and anyone who says that is dreaming.

A NY Times feature recently declared, "His brilliance does not preclude him from sometimes behaving like an immature teenager. 'He’s driven by ambition to let people know that Martin Shkreli’s made it,' said an early investor in his first public company, who spoke on the condition of anonymity to preserve relations in the industry. 'The affirmation is as important to him as the financial success.'"

A positive mind can change the world...

Michael Perino, the Dean George W. Matheson Professor of Law at St. John’s University School of Law who studies securities regulation and litigation, told us, "The standard defense in one of these [kinds of securities] cases is 'I relied in good faith on my counsel,'" but since the feds have also named Greebel as a co-conspirator, "Prosecutors have cut off" that line of defense.

Perino called the move "pretty unusual," since the prosecution has to come to the conclusion that the lawyer "was not just providing legal advice" but also participating in the scheme.

"What makes this case interesting is how the defendant has become notorious" in the past few months, Perino said. Given Shkreli's controversial approach, the Retrophin civil complaint "was bound to get prosecutors' attention."

#arrest
#douchebag
#martin shkreli
#securities fraud
Do you know the scoop? Comment below or Send us a Tip