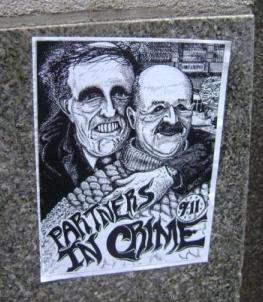 The U.S. Attorney's office will be asking a grand jury to indict former police commissioner Bernard Kerik on tax evasion, corruption, and conspiracy charges. Kerik has reportedly made arrangements to surrender tomorrow, instead of being arrested by U.S. marshals.

Kerik's dealings have also been questioned, even back when his friend Rudy Giuliani was mayor, but his past became a big story when President Bush nominated him for Secretary of Homeland Security in 2004, only for Kerik to withdraw the nomination when allegations of an illegal immigrant housekeeper, odd financial dealings, and even affairs came to light.

Now the charges involve whether Kerik accepted $165,000 in home renovations from a "contractor...seeking a city license" and not reporting $200,000 in income (paid by the same contractor) that went towards a $9,000/month rent at 350 East 79th Street. In 1999, Kerik, then the corrections commissioner, allegedly discussed the contractor, Interstate, with a city investigator at Walker's, which is why the federal prosecutors claims Kerik committed "theft of honest services."

Kerik's lawyer told the Times, "If they decide to bring charges, we will fight them, and he will win." Back in March, Kerik rejected a plea deal that would have allowed him to plead guilty. And in 2005, Kerik was interviewed by New York magazine - Kerik cried a lot.

Photograph of a Giuliani-Kerik wheatpaste by Choice Royce on Flickr