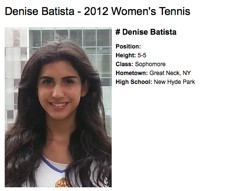 Dan Halloran—how does he do it? We must be missing something about the portly pagan, who today was revealed to have been dating yet another smokin' staffer, this one identified as 23-year-old Denise Batista. According to the Post, the Queens city council member—who is currently under indictment for allegedly accepting hefty bribes to sway the mayoral race—may have entered into a relationship with Batista when she was an unpaid intern in his office, meaning in addition to his other issues, Halloran will now face a nice, invasive ethics probe, Council Speaker Christine Quinn told the paper.

If true, this makes Batista, who studies at John Jay College of Criminal Justice and plays on the tennis team there, the second pretty young thing to have worked for—and subsequently been bedded by—Halloran, the first being his then-21-year-old Chief of Staff, Meaghan Mapes, who worked in his subterranean sex grotto office from 2010 to 2011.

#City Council
#Dan Halloran
#intern
#pagan
#queens
Do you know the scoop? Comment below or Send us a Tip