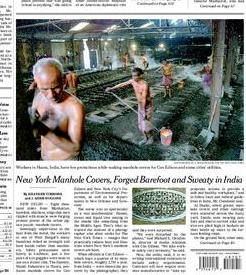 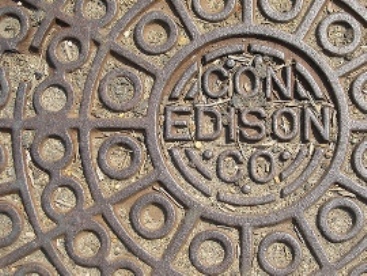 On the front page of the NY Times section A, there was a photograph of some workers in Haoro, India and an article titled "New York Manhole Covers, Forged Barefoot in India." And in fact, the workers are barefoot, bare-chested, bare-handed, and bare-headed as they work in an iron foundry, making manhole covers for Con Ed and other cities. 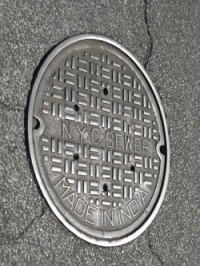 The Times explains that a photographer, J. Adam Huggins, who works with the newspaper brought the story to its attention - on a trip to NYC, Huggins noticed (like others have) that some manhole covers say "Made in India" and became curious about the manhole manufacturing industry when returning to India. Huggins narrates a slide show of incredible photographs.

Con Ed told the Times, "We were disturbed by the photos. We take worker safety very seriously," and said it's revising its international work agreements to make sure they include safety requirements. The NYC Department of Environment, which gets most of its manholes from India, via a city spokesman, said "state law requires the city to buy the lowest-priced products available that fit its specifications." And Shakti Industries, which is where the Times' photographs were taken, claims that there have been "no accidents, never ever. Period," though workers' rights advocates suggest accidents are largely underreported.

Some more facts from the article: The melted metal is about 2,500-degrees Fahrenheit, an Indian factory safety act (from 1948) only requires goggles as protective gear and Indian foundry workers are generally paid the equivalent of a few dollars a day, while American workers are paid at least $25/hour.

Photographs of Con Ed manhole cover and NYC Sewer manhole cover by Triborough on Flickr, who also notices that some city manholes are made in China