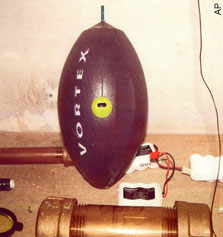 When you're found to be making pipe bombs amidst an apartment arsenal of weapons and then confess to painting swastikas in your Brooklyn Heights neighborhood, expect the book to be thrown at you repeatedly. Ivaylo Ivanov was charged with over 100 criminal counts for his activities.

Found in the Remsen Street apartment he shared with AIDS researcher Dr. Michael Clatts (they had their own living spaces in the duplex) were a "sniper rifle, machine gun, silencers, and pistols" - not to mention a eight pipe bombs including one in a Nerf football - according to the NY Post. Ivanov claimed that he wanted to use the bombs while fishing.

The NYPD let reporters see the weapons (video here) and the bomb squad's Mark Torre said, "Was this bomb capable of functioning as designed and exploding as the bomb-maker intended it to do? The answer is yes. Was this device capable of causing death or serious physical injury to anyone in close proximity? The answer is yes."

Police discovered the weapons when Ivanov shot his hand and asked the police for help, initially claiming he was shot by a stranger. During the investigation, Ivanov admitted to the racist graffiti in Brooklyn. He also apparently distributed flyers with "Kill All Jews" and "US hates you" while dog walking. Police Commissioner Ray Kelly said 100 detectives had been on the case of the swastikas and were narrowing in on Ivanov; they even met Ivanov's dog "because one of the incidents had occurred in a dog run." Kelly added, "A swastika is not just another form of graffiti. It is a symbol that generates real fear, particularly for those still-surviving victims of Nazi Germany , as well as with relatives – so many who reside in New York – who were orphaned by its barbarism"

While police believe Clatts did not know about the weapons, the Brooklyn DA's office may not rule out charges against him.