For nearly two decades, Patrice Smith has celebrated every holiday with her family through a half hour phone call.

That’s because Smith has been in prison for the past 19 years, serving a 25-to-life sentence for the accidental death of a man whom she says sexually abused her as a teenager. Now, she and her family are hoping that Governor Andrew Cuomo will allow her and her family a second chance—and an opportunity to spend the holidays together.

In 2015, Governor Andrew Cuomo announced the creation of an Executive Clemency Board, which would help identify people in the state’s prison system eligible for clemency. Clemency can take two forms—a pardon, usually granted after a person has served their prison sentence, which expunges a person’s criminal history, or a commutation, in which a person’s prison sentence is shortened.

The following year, in 2016, Cuomo granted seven commutations, raising the hopes of thousands in prison that they too might be shown some gubernatorial compassion and a second chance at life. The governor has also granted dozens of pardons to immigrants whose convictions put them at risk for deportation and people convicted of non-violent crimes in their youth.

But, despite the increasing numbers of petitions and attorneys volunteering their time to prepare them, the number of commutations has waned. In 2017, the governor granted only two. In 2018, Cuomo has not issued a single commutation.

There are no limits on the number of commutations a governor can dole out. During his two terms from 1975 to 1982, Governor Hugh Carey granted 155 commutations. Cuomo’s own father, Mario Cuomo, issued 37 commutations. His successor, Republican George Pataki, who eliminated parole for violent felonies and reinstated the death penalty, issued 32.

“If the Governor of California can recognize redemption by commuting the sentences of 70 people, including several who were convicted of violent crime, then so, too, should the Governor of New York,” Steve Zeidman, director of the Criminal Defense Clinic at the CUNY School of Law, told Gothamist. The clinic is currently helping 25 people with their clemency applications.

Dave George is the associate director of Release Aging People in Prison (RAPP). He notes that Cuomo’s record is thin compared to Brown and other state governors. “Trump’s granted more clemency in 2018 than supposedly-progressive governor Andrew Cuomo.”

Patrice Smith is one of the many people who share that hope. Smith was 15 years old when she met 70-year-old Robert Robinson, Jr., who began offering her money in exchange for sex. On at least one occasion, he forced her to have sex when she refused. When she was 16 years old, she and a friend were at Robinson’s house when he demanded that she have sex with him. She refused and, according to her testimony, an argument ensued. Robinson backhanded her across the face and threatened to get his gun, a gun that he had shown Smith in the past.

The argument escalated into a physical scuffle and a phone cord got tangled around Robinson’s neck. (In court, Smith testified that she did not know how she "got [the cord], but it was in [her] hands.") Her friend jumped in to help and, when Robinson stopped struggling, the two left in Robinson’s car. According to her testimony, Smith did not know that Robinson was dead when they left; it was not until later that night that they learned about his death from television news.

Now age 36, Smith is desperately hoping for a second chance. In a letter to Governor Cuomo, Smith writes, “I do not seek to justify a death, or to minimize the pain I undoubtedly caused to his family…Imagine being 16, with limited recourse, lacking the wherewithal to give voice to my shame, so I accepted silence.”

Smith’s family, too, is hoping for gubernatorial compassion. “She’s been in prison longer than she’s been free,” Carmmella Beard, Smith’s older sister and a single mother of four, told Gothamist. Every year, Beard and her daughters drive over 900 miles from their Atlanta home to Bedford Hills for a visit. For Beard and her children, clemency would mean the chance to “finally be able to share holidays, finally be able to call her back, finally be able to hug her.” Beard notes that the prison’s visiting rules permit only one hug at the start and end of each visit.

Smith’s niece, who asked not to be named publicly, has few memories of Aunt Tricie babysitting her as a child. But even from prison, her aunt has remained an influence on her life. During the girl’s teenage years, which she describes as “dark times,” Smith encouraged and mentored her by phone. Now, the 25-year-old says, her aunt wants to help mentor teens who might be going through dark times—and do everything that she can to ensure that they don’t end up in similar situations.

Saldana does not know Smith personally, but he personally knows dozens of men who have spent decades in prison. Over those years, these men have taken every available class and program to transform themselves—and, says Saldana, should be given a second chance.

“They should be measured by who they are and what they’ve accomplished,” he said. “These men and women will be valuable assets to their home communities.” 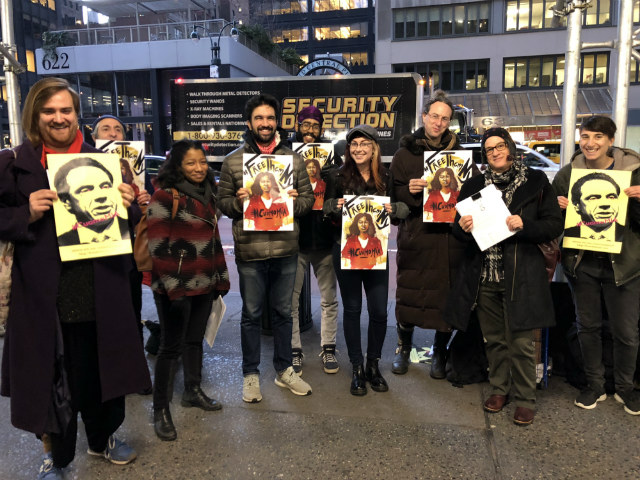 At a rally outside Governor Cuomo's office earlier this week, advocates demanded that the governor more thoroughly exercise his powers of clemency before the year runs out (Victoria Law / Gothamist)

“We want them out and we want them out for the holidays,” explained Alison Brown, a member of #FreeThemNY. “This is the #MeToo moment. Cuomo has come out and said that he supports survivors. Then why are they in prison for defending themselves or their children? It’s time for him to walk the talk.”

This isn’t the last that Cuomo will be hearing about clemencies and commutations. On Saturday evening, organizers will gather outside his Mount Kisco home for Candles for Clemency, a vigil demanding that he commute more sentences.

“Cuomo really needs to step up,” George said. “He says he’s a proponent of ending mass incarceration, but he doesn’t use the power that he has.”

“Words spoken and promises made about New York's clemency initiative are meaningless,” added Zeidman. “What's needed is the stroke of a pen.”

A spokesman for Governor Cuomo issued this statement in response to Gothamist's current clemency plans:

Governor Cuomo has been and continues to be committed to using his clemency power to commute the sentences of individuals who have made exceptional strides towards self-development and whose release is in the interest of justice and are consistent with public safety. The Governor’s record of commutations and pardons speaks for itself: 12 commutations, 43 pardons, 140 youth pardons and over 33,000 pardons to restore voting rights. The Governor is actively reviewing cases for clemency at this time and cannot comment on any individual cases that are under review.​​

#andrew cuomo
#clemency
#commutations
#criminal justice reform
Do you know the scoop? Comment below or Send us a Tip