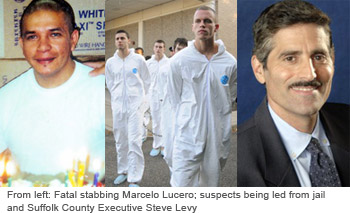 After an Ecuadorean immigrant was stabbed to death, apparently by a group of teens looking to "f--- up" Hispanics, in Patchogue, Suffolk County Executive Steve Levy denounced the crime but later claimed it was a "one-day story," suggesting it was getting media attention because of his immigration policies.

Now Levy tells Newsday, "It was absolutely the wrong time for me to suggest that coverage of events in Suffolk is treated differently by the media. The horrible incident is indeed more than a one-day story. It was a reminder of how far we as a society still have to go."

About Levy's immigration policies: The NY Times has an editorial about Levy, "Local lawmakers often complain about immigration, but Mr. Levy went much farther than most. He founded a national organization to lobby for crackdowns... He tried to deputize county police to make immigration arrests and to rid the county work force of employees without papers. He sought to drive day laborers from local streets, yet rigidly opposed efforts to create hiring sites... He denounces racist hatred, yet his words have made him a hero in pockets of Long Island where veins of racism run deep."

Yesterday, Newsday's editorial states, "Levy is correct in arguing that the vast majority of people on all sides of the immigration debate are not haters - and certainly not killers. But some of those who support his immigration policies are scary. We don't think Levy is a racist. He's a politician addicted to high popularity ratings. And too much of that popularity is coming from the kind of people who spawn hate."