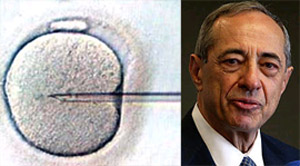 An interesting legal ruling, with a special guest appearance by former Governor Mario Cuomo. Manhattan Judge Renee Roth ruled that two children, conceived by in vitro fertilization using sperm from their father after his death, were eligible for a share of their paternal grandfather's estate.

The Post reported that a man, only identified as James B., saved some of his sperm when he was diagnosed with Hodgkins' lymphoma. He died in 2001, and his widow had two babies, now 2 years and 11 months old. However, James B. was a beneficiary of his father's trust, which was formed in 1969, way before the days of in vitro, so trustees asked the judge for an "advisory opinion," to see "whether the two infant boys are 'descendants' and 'issue' for purposes of such provisions." Enter Cuomo, who represented the boys - possibly his youngest clients ever!

Roth ruled, "A sympathetic reading of these instruments warrants the conclusion that the Grantor intended all members of his bloodline to receive their share," meaning that the tots can share in the trust. The Post added that Roth "urged the state Legislature to amend the current laws to ensure future in vitro kids are treated the same as other children." Cuomo said, "I think that [Roth has] been immensely helpful to the legislative process, which is something that I'm familiar with, having been [in Albany] for 20 years."

More for legal eagles at Law.com.