In the Midst of Super Bowl Week, Baseball News 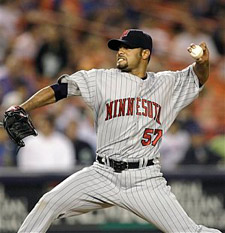 Could this be it? Is our long nightmare about to end? It sounds like it might because there are strong indications out of Minnesota that the Twins are finally going to trade Johan Santana and the front-runners right now are the New York Mets!

While the Mets haven’t been able to match the Red Sox or the Yankees in terms of top prospects, they appear to be willing to provide more prospects, up to five players in exchange for Santana. In many ways the Mets trading for Santana would be a win for three teams. The Mets would get the best player in baseball and the Yankees and Red Sox would see Santana head to the National League. But, if they make the trade they will still have to give Santana a contract extension, and he is rumored to be seeking a deal of six-years/$150 million.

And, just in case you forgot, Roger Clemens still says he is innocent. His latest argument comes in the form of an 18,000 word report from his agents. The report makes comparisons of Clemens’ career to the careers of Randy Johnson, Curt Schilling and Nolan Ryan and breaks down his career numbers in a myriad of ways. One interesting claim is that Clemens would have gone 24-3 with a 1.57 ERA if he had pitched for Texas instead of Houston in 2005 because of run support.

Clemens’ testimony in front of Congress is scheduled for February 13th.

Photo of Johan Santana pitching against the Mets in June, 2007 by AP/Kathy Willens