Sure, the NFL kicked off this weekend, but NYC's soccer teams were still plenty busy. The New York Red Bulls' post-season hopes were bolstered by Sunday's big 4-1 win in Houston. The New York Cosmos had to settle for a tie with the visiting Atlanta Silverbacks. And NYC FC named former Rutgers Athletic Director Tim Pernetti was announced as their Chief Business Officer.

First, to Houston, where the Red Bulls had never won a regular season game since the Dynamo joined the league in 2006. Both teams were missing key players and at first, it looked as though New York's thin defense would get abused, with Houston getting the better of the first half. A beautiful attacking sequence allowed Eric Alexander to chip Houston's Tally Hall to open the scoring, but Houston would level the match just four minutes later.

Tactical adjustments coming out in the second half paid off, as NY smothered the Dynamo's attack, and counter-attacked with speed. Thierry Henry shrugged off Adam Moffat to score his first goal since July on a counter involving recent team additions David Carney and Bradley Wright-Phillips. Carney, Wright-Phillips, and Henry connected again 10 minutes later to send Jonny Steele in, who easily rounded Hall for NY's third. The dagger came late, as Lloyd Sam blasted home his second goal in two games to end the match 4-1. Not only was it a historic win for RBNY, but a historic loss for the Dynamo: it was the first time they had conceded four goals at home since joining the league. 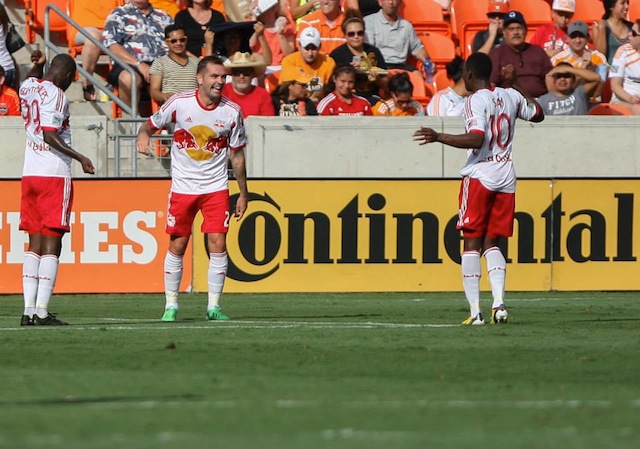 Fans weren't only talking about the goals, but the celebrations. Henry, the master of stoicism, may have been taking a cue from Fashion Week when he simply walked to the goal post, leaned on it briefly, then returned to midfield. But the trio of Steele, Wright-Phillips, and Sam were seen celebrating the final two goals with a goofy bouncing group dance, best described as a cross between "The Carlton" and characters from Peanuts. The group refused to divulge details of the celebration after the match, but we can only guess John Wolyniec is happy to finally have some competition for his hysterically bad "Thriller" celebration (also in Houston).

Coach Petke was understandably pleased with the result: "To see the stuff that we worked on all week, in not an easy situation on the road…it was a great feeling." And after last week's drama with Henry, Petke was full of praise for his captain. "Phenominal goal, world class finish, and he was a hell of a leader today as our captain. Really got the guys going."

The result keeps RBNY in the three-way first place tie with Montreal and Kansas City (who also won this weekend), while Houston stays stuck with Philadelphia and New England (who all lost this weekend). With six games remaining, the Red Bulls find themselves 8 points above the playoff cutoff line. They will hope to grow that margin further at home next weekend when they face the hapless Toronto FC.

Tim Pernetti, center, during his time at Rutgers. (AP)

Meanwhile in the Bronx, NYC FC added a familiar face to their executive team. Tim Pernetti—you may remember him from the whole Mike Rice/Rutgers coaching scandal—was announced this morning as the team's Chief Business Officer.

“I feel truly privileged to have been appointed to this position and to play a key role in building this Club from its infancy," said Pernetti in the club's statement. "I relish the opportunity to be part of a global organisation, and also to use my experience to create a first class Club for New Yorkers and one in which they will always have a voice. This is a tremendously exciting time for all involved and interested in soccer in New York and beyond.”

Lastly, at Hofstra, it looked like it might be another episode of "the Cardiac Cosmos", with late game heroics being necessary to get a win. But the magic wasn't there Saturday night, as the Cosmos could only manage a 1-1 draw with the visiting Atlanta Silverbacks. Marcos Senna converted a penalty kick just before half time, but Atlanta's Shane Maroney headed home a free kick shortly into the second half. Cosmos forward Alessandro Noselli pulled a muscle and was forced to leave the match early.

The result leaves the Cosmos in fourth place in the NASL. They face Minnesota United next Saturday night at home.

Full highlights from the Cosmos draw: