In Search Of The Elusive Struggling Rent-Stabilized Landlord

It's an annual ritual: each spring hundreds of tenants and community organizers and a few dozen landlords and their trade group representatives appear before the nine-member Rent Guidelines Board, the mayor-appointed body in charge of setting rent increases for rent-stabilized apartments, and argue their case for what the new rent guidelines should be. Rent-stabilized apartments make up nearly half of the city's 2 million rental units, so what happens at this often-tedious gathering affects a huge number of people. And for the last two years, with the installation of Mayor de Blasio's appointees, and concerted pressure from the mayor and an array of legislators, the guidelines board has voted to freeze rents for one-year leases, something never done before in the panel's four-decade history.

The stakes for tenants are clear. Over half of New York City renters spend more than a third of their income on rent, meaning they meet the federal definition of rent-burdened. New Yorkers' incomes were stagnant from 2007 through 2015, meaning we are only now beginning to recover from the 2008 recession (the guidelines board increased rents 4.5 percent that year, for what it's worth). And despite de Blasio's signature initiatives to provide lawyers to tenants facing eviction and vouchers to homeless people seeking apartments, 22,000 people were evicted last year, and the number of people in the shelter system hovered near a record 60,000.

Harder to discern are the struggles faced by rent-stabilized landlords, whose representatives painted a dire picture for the board at a hearing this April, ahead of a second year of freezes.

"We’re very discouraged. We just feel very threatened," said Jimmy Silber, of the Small Property Owners of New York. "And we feel that this board is an anti-owner board. That’s the perception."

Jack Freund, a vice president of the Rent Stabilization Association, acknowledged to the board that provisions added to the rent regulations in the 1990s—allowing for 20 percent rent increases when apartments are vacated and proportional permanent increases for renovation work—offer landlords the ability to raise rents even when faced with a freeze, but said that such measures aren't available to some of his group's 25,000 members.

Speaking to Gothamist, Freund said that the hardship isn't clear in the data on landlord profits because corporate owners are doing all right. He called the situation "a tale of two cities." "Those owners that don’t have those resources or sophistication to avail themselves of the legal tools that exist to raise rents are going to be in a continuing deteriorating state," he said.

Hearing points like these, the board's two tenant representatives are usually quick to point out that the state offers relief for owners who are underwater, and few take it. Data obtained by Gothamist shows just how few.

The Division of Housing and Community Renewal, the state agency responsible for administering rent regulation, offers what is called a hardship increase, not just to landlords who are underwater, but to landlords whose income dips below the amount the building brought in the first three years he or she owned it, or whose margins are less than five percent. 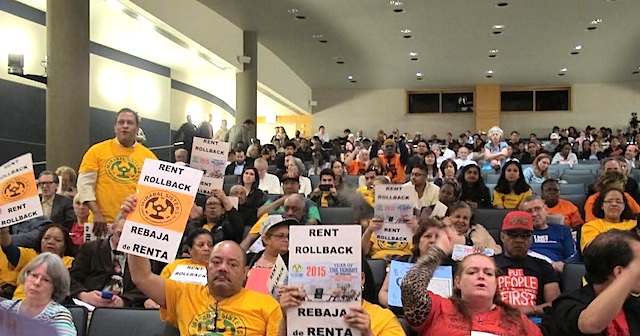 During the past two years tenants and their political allies have advocated for rent rollbacks, and have gotten rent freezes. (Gothamist/Steve Wishnia)

"The application itself is like a book. It’s a very lengthy and complicated application to fill out," he said (the form is 12 pages long).

However, he said, "the real problem with it is that DHCR itself finds any reason it can not to complete processing. The process takes years."

For example, he said, if a building owner is having financial troubles and pursues a tax reduction at the same time as a hardship increase, DHCR will pause the application process until the tax process is resolved.

"Owners are aware of this," he said. "They know that very few if any hardship applications get granted, so why bother applying?"

Landlord suffering is also difficult to find in the voluminous market research compiled each year by the RGB ahead of its decision. For example, though property tax and water rates went up recently, the board found a 1.2 percent decrease in its building owner price index for 2015, owing mostly to a drastic, 41 percent decline in the cost of fuel oil. Freund and others argued that water and tax hikes are lasting, unlike the fuel oil price fluctuation, and the index fails to account for such burdens as required facade inspections, and lead inspections when apartments are vacated.

Then again, the board found that landlords' net operating income, meaning the money they make after expenses, went up 3.5 percent, in 2015, the 10th consecutive year it had increased. And though landlord advocates argued that the rent freeze would make it harder for owners to invest in large-scale renovations, the number of filings for such renovations, which come with permanent rent increases, has also risen. 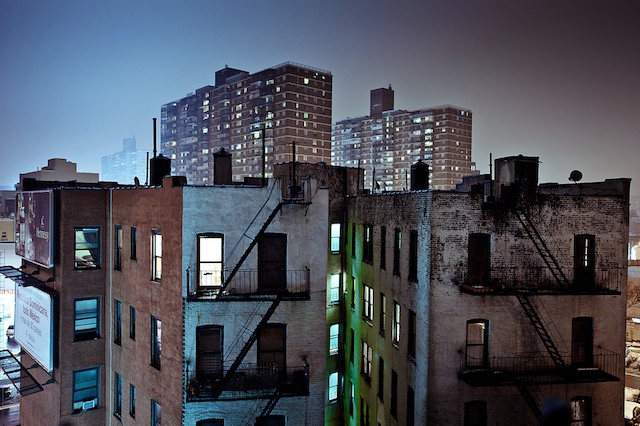 Since 1990, the board found, rent-stabilized landlords' net operating income has increased to 42.8 percent, so that nowadays the average owner of a rent-stabilized building makes $488 per month per unit (Freund protests that this profit figure doesn't include mortgage costs). These increasing margins come despite the fact that the median rent stabilized tenant was paying $1,090 for an apartment in 2014, compared to the $1,500 median market rent.

Also, a survey of 12 banks by the guidelines board found zero rent-stabilized buildings were foreclosed on in 2015, as the same survey found in 2014.

"That’s a limited sample. The mortgage survey report is a survey of a select few banks," Freund said. "That doesn’t mean there aren’t any foreclosures. I’m sure there are foreclosures all the time. Clearly, properties are being foreclosed every day."

Freund suggested looking at tax lien sales, where the city auctions off unpaid tax debt to an investor-run trust collecting 18 percent interest, for a better indicator of owner travails.

"There’s clearly distress out there, and it’s just not being resolved through the hardship process," he said.

Tenant advocates are dubious that these figures represent many small owners in real financial trouble.

On second thought, Epstein knew one small-time landlord who was underwater. That landlord, he said, applied for and was granted a hardship increase of 20 percent. He said he'd ask her if she'd like to speak to Gothamist, but wasn't optimistic about the chances. Freund similarly said he could not put us in touch with any troubled owners: "I don’t know that owners would be too eager to talk about their situation. If they have mortgages, that may be threatened by disclosure."

Another tenant advocate, Judith Goldiner, attorney in charge of Legal Aid's Law Reform Unit, said that she has not met a bonafide struggling small landlord in the course of her work, but she won't write off the possibility of one existing.

There is, Goldiner said, a double standard at work in the argument that rents should increase because some building owners are struggling.

"We might buy a place that’s too expensive for us and we might lose it, but the government won’t bail us out for that," she said. "[Landlord lobbyists are] essentially saying that, 'We made a bad deal and you need to bail us out by raising the rent.'"

There is another glimmer of landlord agita out there. RGB data for 2014 shows that 6.3 percent of buildings studied had costs that exceeded their gross income, meaning the owners were underwater.

Goldiner and Epstein said that these buildings are largely ones bought at inflated rates by investors who were either ignorant of their rent-regulated status, or were planning to pressure the rent-stabilized tenants out and turn the units market-rate. Lending credence to this idea, a recent public advocate report examining the 22 rent-stabilized buildings affected by tax lien sales showed that such buildings have high rates of tenant harassment and turnover, leading to the deregulation of units.

"The only reason they’re there is they're engaging in predatory practices. They're buying properties that they can’t afford at the time they buy them, to evict tenants and raise rates," Epstein said, citing Steve Croman, Raphael Toledano, and investor purchases of Stuyvesant Town. "I have yet to see someone in that 6 percent losing money."

Without small-time rent-stabilized landlords speaking up on their own behalf—you can reach us via email here—we are left with the data, which strongly suggests that the overwhelming majority of rent-stabilized owners are doing just fine, and with the protestations of industry representatives like Freund, who fixate on the parts of the data that can't be readily parsed.

"Harvey’s a great guy," Freund said in response to Epstein's point about predatory investors. "But he comes up with these things out of thin air that have no basis in any fact. That’s Harvey’s point of view, so he wants to point to that. The fact is, we see owners every day, small owners who are struggling with their buildings."

Freund's organization is now suing the city, arguing that the RGB considered tenant affordability as a factor in deciding a rent freeze, when legally that consideration should never come into play.