In Newly Released Deposition, Cosby Calls Himself "A Pretty Decent Reader Of People" In "Romantic" Situations

Early this month, part of a 2005 deposition Bill Cosby made in a sexual assault case was made public, and it turned out that the comedy legend admitted to obtaining Quaaludes to give to young women. Now, the NY Times got the whole deposition, "In the deposition... the entertainer comes across as alternately annoyed, mocking, occasionally charming and sometimes boastful, often blithely describing sexual encounters in graphic detail."

While accusations had been made for years about Cosby's allegedly predatory behavior towards young woman, comedian Hannibal Burress's mention of them went viral. Then dozens of women came forward to say that Cosby had drugged and then sometimes sexually attacked them, including models Janice Dickinson and Beverly Johnson. Others have detailed how he acted inappropriately with them.

He talked of the 19-year-old aspiring model who sent him her poem and ended up on his sofa, where, Mr. Cosby said, she pleasured him with lotion.

He spoke with casual disregard about ending a relationship with another model so he could pursue other women. “Moving on,” was his phrase.

He suggested he was skilled in picking up the nonverbal cues that signal a woman’s consent.

“I think I’m a pretty decent reader of people and their emotions in these romantic sexual things, whatever you want to call them,” he said.

Through it all, his manner was largely one of casual indifference.

At one point in the first day of questioning, Dolores M. Troiani, the lawyer for the plaintiff in the case, Andrea Constand, a young woman who worked at Temple University as a basketball manager, seemed struck by Mr. Cosby’s jocular manner.

“I think you’re making light of a very serious situation,” she said, to which Mr. Cosby replied: “That may very well be.”

Constand accused Cosby of drugging and then sexually assaulting her and the deposition reveals how he pursued her (all while married to wife Camille):

Mr. Cosby said he gave her one and a half tablets of Benadryl to relieve stress, they kissed and had sexual contact. Her lawyer said she believed it was a much more powerful drug.

Some time later, after Ms. Constand had moved home to Canada, Mr. Cosby spoke with Ms. Constand’s mother on the telephone. The mother, he said, was upset about what her daughter said Mr. Cosby had done, describing the experience as “a mother’s nightmare.”

In the deposition, he said he was worried that Ms. Constand’s mother would think of him as a “dirty old man.”

During the call, Mr. Cosby told the deposing lawyers, he wanted Ms. Constand to tell her mother “about the orgasm” so that she would realize it was consensual.

He also admitted that he pursued a model, Beth Ferrier, in the 1980s, by asking about her father, who had cancer. Gloria Allred, who represents Ferrier and many other accusers, said in a statement, "Bill Cosby...reveals himself to be a man, who preyed on many vulnerable young women in order to have sexual contact with them."

For example in that deposition, Mr.Cosby testified under oath about my client, Beth Ferrier, Jane Doe number 5 in that lawsuit. He was asked the following about Beth:
Q. She says that she stayed with you and that you began talking about her career and asking about her father who died of cancer. Does any of that ring a bell with you?
A.Yes.
Q. Do you remember talking about that?
A. Yes.
Q. Do you remember what else you talked about?
A. That's enough.
Q.Did you ask her those questions ,because you wanted to have sexual contact with her?
A. Yes. 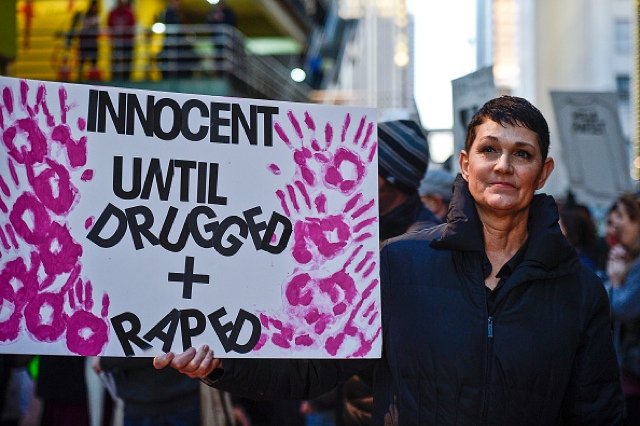 Allred added, "Cosby's testimony demonstrates how deceptive, manipulative and disgusting he was. He preyed on a woman grieving the loss of her father, not because he cared about her and wanted to comfort her, but instead,because he wanted to have sexual contact with her. He lied to Beth, to many other women and to his own wife. It is no wonder that he fought to keep this deposition which reveals his revolting predatory conduct hidden from public view, but the truth is out now and it will never be hidden again."

The Times notes, "In the court case, 13 women came forward with anonymous sworn statements to support Ms. Constand, saying that they, too, had been molested in some way by Mr. Cosby. But they never had a chance to pursue their claims in court because, six months after the fourth and final day of his deposition, Mr. Cosby settled the case with Ms. Constand on undisclosed terms. His deposition was filed away, another document in a settled court case, until now."

Cosby's lawyers have explained the settlement, "The only reason Mr. Cosby settled was because it would have been embarrassing in those days to put all those women on the stand, and his family had no clue. That would have been very hurtful."

#andrea constand
#Beth Ferrier
#bill cosby
#drugging
#sexual assault
Do you know the scoop? Comment below or Send us a Tip