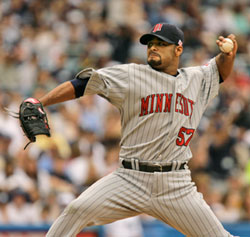 It may have taken a few extra hours, but the Mets finally got their man. The Mets and Johan Santana agreed to a six-year, $137.5 million contract, with a club option for a seventh year. When the Mets and Twins agreed to the trade on Tuesday, Major League Baseball gave the Mets and Santana until 5 p.m. Friday to reach a deal. With the deadline approaching yesterday, but no agreement reached, the two sides asked for, and were given, a two-hour extension. What's a couple of hours when you're working out the richest contract for a pitcher in baseball history? All that's left now is a physical for the players involved in the trade. Santana will take his today.

The deal reached yesterday isn't an extension of Santana's existing contract, which had one year left (at a mere $13.25 million), but a new one that will have the two-time Cy Young winner in Flushing until at least 2013. The new contract for the 28-year-old lefty will be worth about $23 million a year. The 2014 club option is for $18.75 million with a buyout of $5.5 million. To acquire Santana, the Mets traded four minor league players, outfielder Carlos Gomez and pitchers Phil Humber, Deolis Guerra and Kevin Mulvey, a deal that many received positively.

The contract eclipses the seven-year, $126 million contract Barry Zito signed with the Giants last year. Once finalized, Santana's contract will make him the 2nd highest paid player in baseball after Alex Rodriguez.

UPDATE: Media are reporting that Santana has passed his physical, so the trade is as much a done deal.