In Defense Of Cyclist Salmoning

Bikers who ride the wrong way up a one-way street or bike-lane are called salmon. You should never salmon. It will lead to certain death for you, the pedestrian (probably a child) you hit with your bike, and the driver of the truck who swerves to avoid you and hits scaffolding, causing a huge collapse that shuts down local subway service. It's impolite, dangerous, and certainly unhip. 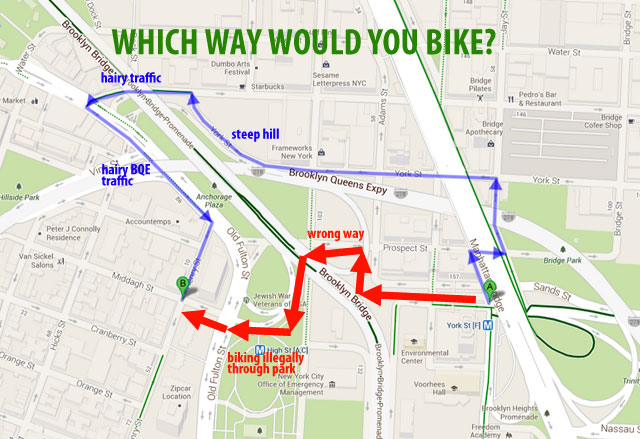 There are certain places in the city, particularly in neighborhoods with a lot of one-way streets, like DUMBO, that are difficult to bike around in without salmoning. To get from Point A to Point B legally, you'll need to bike up a hill, around a park, through a tunnel, and generally out of the way at least 5 blocks. Or, you can salmon: ride that tempting one or two blocks the wrong way, carefully pedaling slowly to avoid putting anyone in danger, giving reassuring smiles to the parents pushing strollers giving you the finger and the truck drivers honking at you to get out of the way.

You shouldn't do this. You should just get off that bike and walk it the one or two blocks. And yet, you're late for that meeting...

This morning something interesting happened to me. I was Citi Biking to work, and the local docking station at Pearl Street was completely full (I should have checked the app in advance, but I was late for that meeting, and I didn't.) So I got back on the bike, and rode 1.3 blocks up Front Street the wrong way, carefully avoiding two pedestrians and one car. Front is a wide street, so this was easy, didn't involve the treacherous cobblestones on Water Street, and didn't put anyone in danger. 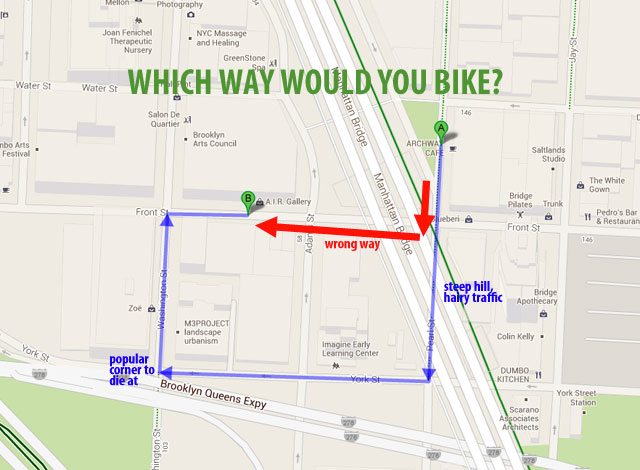 After I dock, I'm walking away from the bike, when a young woman stormed up to me. She says, "You know, you rode the wrong way on that street, and you could have gotten hurt or hurt someone!" So I pull out my camera, and ask if I can videotape her, because I've wanted to do a post about this for awhile, and she's really good and angry and she's perfect to explain why salmoning is evil.

But she puts her hand up in the lens and tells me to put it away. So I do. But I ask her to explain why she's so angry, and she says going the wrong way is really wrong and dangerous and what the hell is wrong with me.? I let her go on for a minute, because it's important to let people feel understood when they're angry.

But then I do some jujitsu-zen and say "I can tell you're really angry, but let me tell you what happened." And I explain that the other station was full, and it's really hard to go the legal way, all the way around on York, or on the cobblestones through the archway, and I was late, and I was really careful, because I know how wrong salmoning is, and now that I've explained myself and she can put herself in my shoes, is she still so mad?

And she actually still was kind of mad, but she said she thought about some of what I said, and she guessed that those were somewhat good excuses, but I should still be more careful. Then she started to walk away, so I took a second to introduce myself and get her name, which was Joelle. I couldn't find her on Facebook afterwards, though.

So I get into the office and tell the crew the story, and everyone agrees that yeah, there are times where, despite how evil and wrong it is, they've salmoned to avoid going way out of the way, or through a dangerous intersection, or up a big hill, and hey, this is New York City, and if you can't salmon one or two blocks once in a while, why the fuck do we live here anyway?

What do you think? 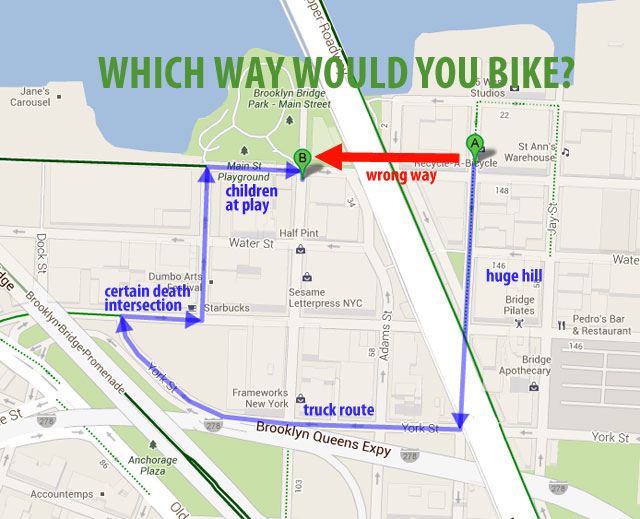 #citi bike
#cyclists
#salmoning
#original
Do you know the scoop? Comment below or Send us a Tip