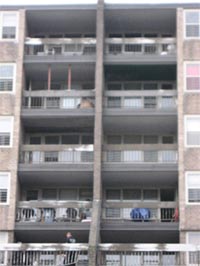 A man died while trying to flee the dozens of federal agents who raided a heroin mill in a Castle Hill apartment. The man jumped from a 9th floor balcony to a 6th floor balcony, but "slammed his head against a sixth-floor railing." Two other women who tried to make the same jump were hospitalized.

Eleven other people tried to flee as well, but were eventually captured. They jumped down to other balconies, and one resident of the building told the Daily News, "They said, 'I'll pay you $2,000 to hide me.'" He opted not to and he and his mother "got kitchen knives" to "scare them" away.

Inside the apartment 9G, which had dark-tinted windows and little furniture, Drug Enforcement Agents found $200,000 worth of heroin (2-3 kilos), which was being "sorted into small packages, including a large number of 'dime bags.'" According to the DEA, the NY-area heroin operations have grown in recent years.