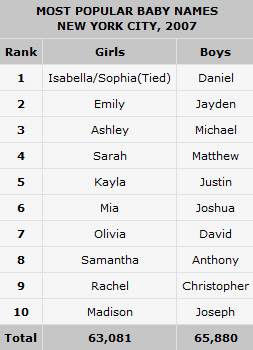 The Health Department has released their annual report on baby names in New York City, and among newborn boys the name "Jayden" is (almost) number one with a bullet, ranking #2 overall and #1 among black and Hispanic babies. Jayden wasn't even in the top ten in 2006, and baby name expert Laura Wattenberg shares a theory with City Room about the his stunning rise in popularity: Two years ago, one Jayden James Federline entered the world stage, the offspring of recording artist Britney Spears. “Britney Spears seems to have shifted the standard spelling. That name used to be spelled every which way, but now the ‘y’ spelling has become dominant,” Wattenberg says.

In fact, many New York-born children will one day be able to trace their names back to other fin de siècle celebrities like Rhianna (rank: #70), British actresses Sienna (#60) and Keira (#61), American screen stars Scarlett (#68), Charlize (#84) and Reese (#142). There were also 32 "Messiah" males born, 26 Darwins, and 24 Pulp Fiction fans somehow convinced their wives to name their sons Ezekiel. The most popular boy's name overall was Daniel, Michael was the big favorite for whites, and buried at the bottom of the list are ten lonely Kens. (There are no Barbies on the girls' side, but 16 Barbaras.)

The most popular girls' names in 2007 were Isabella and Sophia, followed by the ever-ubiquitous Emily. Ashley was third. 26 baby girls are Precious, 25 are Diamonds, and 10 mothers named their daughters Wiktoria. Nationwide, Emily and Jacob were the most popular names, according to the Social Security Administration. Their website also lets you search for the most popular names over the years, all the way back to 1880 when Mary and John were most popular. And for local procreators seeking inspiration, the whole NYC Health Department pdf report is here, and here's another pdf on historical trends in baby naming.

#baby
#jayden
#name
#naming
#new york
#nyc
#rankings
#suggestion
Do you know the scoop? Comment below or Send us a Tip
A new Gothamist is coming! We’ve moved comments over to our beta site. Click here to join the conversation and get a preview of our new website.