In a Half-Full Stadium, Jets Close Out on Bright Note 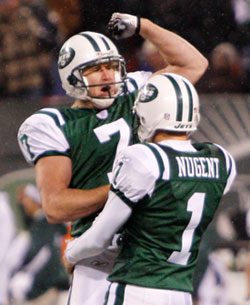 A timeout and a holding penalty on the Jets couldn't prevent Mike Nugent from hurting the Jets' draft position helping the Jets end a disappointing season with a 13-10 win over Kansas City on Sunday evening at the Meadowlands. A 33-yard make, which set off some premature celebrations, turned into a 43-yard try after Wade Smith got nailed for holding. Nugent made that too, a fitting sendoff for special teams coach Mike Westoff, who told his team he wouldn't be back next season. He's been suffering from a malignant tumor in his femur and has walked around on crutches while leading the most successful of the Jets units. Given how inconsistent the offense and defense have been, that shouldn't be too hard, but the Jets' Leon Washington was one of their biggest threats -- as a returnman.

Herm Edwards' return to face the Jets as Kansas City coach didn't draw that big a reaction, but, then there weren't that many people there. Those that were there weren't able to partake in the halftime ritual of harassment that has taken place near Gate D. The Meadowlands finally took measures to curb that.

As for the team's play, Thomas Jones' quiet season came to an end with another effective, if not spectacular, performance. The Jets will have plenty to think about when it comes to drafting in April, but Jones' four-year contract means he'll probably be around next year. Kellen Clemens didn't flourish in the rain, completing just over half his passes for 115 yards. He's another question mark entering the offseason. The 4-12 season put forth by the Jets comes as a major disappointment, and the coronation of Eric Mangini as the NFL's next genius head coach will have to wait. Years 3 and 4 of the tenure will tell the Jets if they made the right call in prying him away from the Patriots.