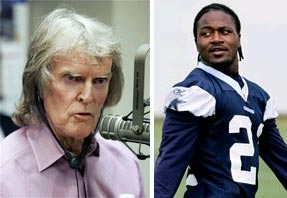 After many questioned his Monday morning remarks about Dallas Cowboys cornerback Adam "Pacman" Jones, radio shock jock Don Imus defended them, explaining he was being "sarcastic."

On Monday, newsreader Warner Wolf had mentioned Jones's desire to drop the Pacman nickname, hoping to drop the associations with his many legal troubles. Imus had asked Wolf, "What color is he?" to which Wolf said, "He's African-American." Then Imus said, "Well, there you go. Now we know." Many people didn't catch the sarcasm, including Jones himself, who told the Dallas Morning News, "I'm truly upset about the comments. Obviously Mr. Imus has problems with African-Americans. I'm upset, and I hope the station he works for handles it accordingly. I will pray for him."

The Reverend Al Sharpton, who voiced concerns about the remarks yesterday (and whose radio show Imus appeared on after his Rutgers women's basketball remarks), said he hoped Imus meant what he said, "If now Imus is saying he's joined the ranks of those that are raising the question of racial disparity in the criminal justice system, then he's taking a correct position. I don't have any record of him saying that in the past." Still, Sharpton says he's examining the remarks.

The Lede asked a good question: "Have Americans all lost the ability to detect sarcasm?"