More Speculation of a Third Term for Mayor Bloomberg 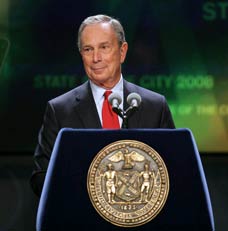 New York business leaders have been scrambling recently to find a mayoral candidate for 2009 who would be as business-friendly as billionaire Michael Bloomberg has for the last seven years. Today the NY Post reports that they may have found their man for '09: Mayor Bloomberg.

The city term-limits law, which was created in 1993 and currently restricts elected officials to eight years in office, can be changed through City Council legislation, a charter referendum or state legislation (here's a history of term limits from Gotham Gazette). It looks like the most likely path to a third Bloomberg term would be through Council legislation. There it would need to get through likely opposition from Council Speaker Christine Quinn, an expected candidate in the 2009 mayoral race.

Extending term limits has received support from pols of years past, including former Council Speaker Peter Vallone and the last mayor to serve more than eight years, Ed Koch. "I don't think eight years is enough. Twelve is enough," said Koch. Still, Bloomberg himself claims not to be interested in running again.

Another Bloomberg ally and fellow billionaire to come out publicly against term limits is Donald Trump. Trump called term limits, "a terrible idea, an artificial barrier. Why is he being told he cannot run again?”