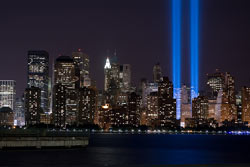 Federal officials at the Dept. of Homeland Security have agreed not to use information supplied by the spouses and children of 9/11 attack victims to deport them. The number of people this will affect numbers less than two dozen widows, widowers and orphans--all in the country illegally--who have feared cooperating with federal officials, or even lawyers and lawmakers fighting to give them asylum in the U.S., would lead to their deportation.

The legal reprieve will not be extended to illegal immigrant family members who have criminal records, ties to terrorism, or deportation orders that were already in effect at the time of the attacks. The people who are subject to the reprieve, however, have already received millions of dollars from the 9/11 Victims Compensation Fund. The NY Times reports many of the family members have been unable to invest those funds because of their illegal status and have been forced to remain under the legal radar.

Homeland Security's Stewart Baker said the family members will be allowed to provide biographical and personal information regarding their family situations without providing their names. The reprieve is meant to give lawmakers and lawyers an opportunity to gather information about this group of people in order to possibly grant them permanent legal status.

Photo of WTC Tribute in Light, by brianvan at flickr

#9/11
#dept. of homeland security
#family members
#illegal immigrants
#orphans
#reprieve
#widows
Do you know the scoop? Comment below or Send us a Tip