Hardat Sampat, a 35-year-old Guyanese national, was reportedly driving to Queens Criminal Court for a scheduled appearance on burglary charges Tuesday morning when federal Immigration and Customs Enforcement officers pulled up in unmarked cars, boxing in Sampat and his wife at the corner of 101st Avenue and 112th Street in Richmond Hill.

When it became clear Sampat was under arrest, family members and bystanders in the dozens gathered around in his defense. "Call the lawyer, record everything, it's okay," an anonymous woman can be heard saying in video acquired by the Daily News.

Sampat was eventually taken from the scene in handcuffs, but not before NYPD officers responded to the scene to perform crowd control. While no additional arrests were made, immigrant advocates said Wednesday that the incident shed light on New York City's real-world function as a sanctuary city. Already, they said, immigrants have seen reports of NYPD officers relaying arrest information to ICE. Their friends and family members have been arrested for low-level offenses that make them vulnerable to ICE intervention.

These interactions with police have proven puzzling, in light of Mayor Bill de Blasio's repeated pledges to protect immigrant New Yorkers, including legal permanent residents and undocumented residents like Sampat.

"The message to bystanders is: how safe am I?" said Tina Luongo, Attorney in Charge of the Legal Aid Society's Criminal Court unit. "People don't understand the nuances of why law enforcement does what they do. So they see the NYPD badge next to the ICE badge and immediately they think NYPD is helping ICE."

Luongo believes the implications are serious. "The community now has this as a basis for what the NYPD does, and it impacts their decisions to go to school, to hospitals, to courts, to seek city services—all of that."

Tania Mattos of Queens Neighborhoods United and Oscar Diaz of ICE FREE NYC have been organizing in opposition to collaboration between police and federal officials since Donald Trump took office. "NYPD has been eager to collaborate with ICE in ways that negate de Blasio's 'sanctuary' rhetoric," they told Gothamist. "Their active participation in obstructing community members from resisting ICE reveals this."

"Our communities will continue to stand together, just as they did to try and save Hardat Sampat, and we demand NYPD end their collaboration with ICE," they added.

Since 2014, New York City has refused to detain immigrants in city precincts or jails at ICE's request, under most circumstances. But ICE is able to conduct raids and detain immigrants in New York City. Under President Donald Trump, the Department of Homeland Security has begun to roll back Obama Administration guidelines that prioritized non-citizens with violent felony convictions for deportation.

"The NYPD does not act as an arm of immigration enforcement," Mayoral Spokeswoman Rosemary Boeglin stated. "NYPD officers were directed to the scene for crowd control, but made no arrests."

"It is essential that immigrant New Yorkers know they can feel confident interacting with the NYPD, and will never be asked for their immigration status when reaching out for help or to report a crime," she added. 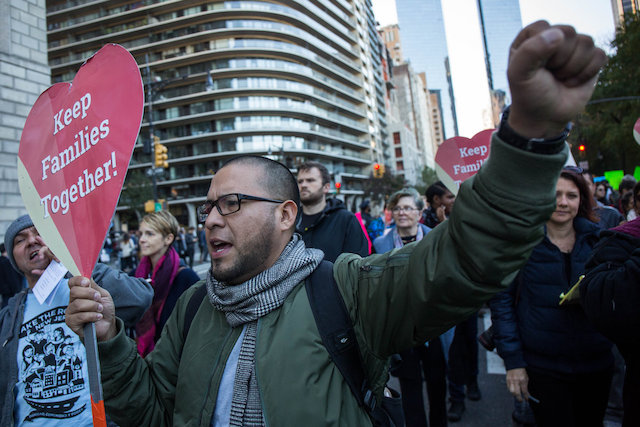 Sampat has two recent arrests on his record, according to the Queens DA's Office. He was arrested on April 10th after allegedly breaking into his downstairs neighbor's apartment in Queens and stealing a television and multiple pocket books, as well as spraying the walls and furniture with white spray paint. He allegedly broke into the same apartment on May 9th, and stole a Play Station and tablet. Sampat has been charged with criminal mischief and burglary, both felonies, as well as petite larceny, a misdemeanor.

The Queens resident also had an open ICE detainer when he was arrested, according to ICE spokeswoman Rachael Yong Yow, for allegedly reentering the country illegally. His next criminal court date is set for June 15th. If convicted, Sampat's record would include so-called "serious and violent" felonies, from a list of 170, that the NYPD and DOC cooperate with ICE on. Mayor de Blasio is also planning to withhold legal services funding for immigrants with such convictions, as ICE arrests soar nationally and locally.

"My sister in law, my mother in law, say he's innocent," an anonymous woman on the scene told NBC, of Sampat. "He didn't do anything. Why? Why is this? He had a court case today. Let him go. And let the judge make the decision."

Neither a criminal attorney nor an immigration attorney for Sampat could immediately be reached.

After Sampat was arrested, around 10:00 a.m. on Tuesday, "[ICE] officers contacted the New York Police Department for assistance departing the location, as the vehicle the subject was in was blocking traffic (as advised by family members on the street) on the one-way street," Yong Yow stated in an email to Gothamist.

"The responding NYPD officers instructed the driver to move the vehicle, to which she complied. ERO officers then departed the scene without further issue," she added.

"We don't get involved in the arrest or anything," an NYPD spokesman told Gothamist on Wednesday. "It's not assisting. ICE, if they have to make an arrest, we can't stop them. Basically, when we respond it is to keep the peace."

The officer added that the NYPD may still make arrests on the scene if "somebody breaks the rules."

Josmar Trujillo, an NYC-based activist for police reform, said any attempts at nuance are futile.

"When shit hits the fan, NYPD comes to the aid of ICE," he said. "That's quite the sanctuary."

Sampat is currently being held at the Hudson County Correctional Facility in Kearney, New Jersey, according to records.

#Hardat Sampat
#ICE
#nypd
#queens
#original
Do you know the scoop? Comment below or Send us a Tip