Making the Call: Why Moving Joba is the Right Move 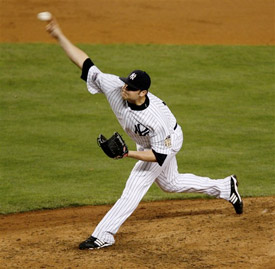 At 7:10 p.m. on Tuesday night, Yankees pitcher Joba Chamberlain will take a big league mound for the first time as a starter. Whether he succeeds or fails at his new job may very well determine the fate of the Yankees’ season and Brian Cashman’s future with the club. Taking a dominant setup guy out of the back of the bullpen and putting him into the rotation is not a popular decision in some circles, but it is the right one for three reasons.

First, having a true ace at the front of your staff is a huge advantage in the playoffs. An ace can set the tone in a series and prove the difference between winning and losing. Do the Marlins of 2003 and the Red Sox of 2007 win the World Series without Josh Beckett? Probably not, and while Joba has a long way to go before he compares to Beckett, scouts says he has the pitches and temperament to become an ace. You don’t waste that type of talent in the bullpen.

Math is another reason to move Joba. Working out of the bullpen, the Yankees can expect to get somewhere between 80-100 innings out of Chamberlain in a season. Move him to the rotation and you can double that number. The more innings that Joba records, the less the Yankees have to rely on players like Farnsworth to help them.

Finally, the Yankees should make this move because their closer situation is settled for the immediate future. Mariano Rivera signed a three-year deal in the offseason and he has been his dominant self in 2008. Rivera’s success will not continue indefinitely, but the Yankees have time and a number of prospects in the minors who could eventually fill his shoes. Think back to last June 1st, how many Yankees’ fans had even heard of Joba? It could be J.B. Cox, it could be Mark Melancon, but the Yankees will find someone to replace Joba in the bullpen a lot easier than finding someone to head their rotation for the next ten years.

"Making the Call" is a new opinion post that will cover sports topics.

#baseball
#brian cashman
#joba chamberlain
#Making The Call
#opinion
#opinionist
#sports
#Yankees
Do you know the scoop? Comment below or Send us a Tip