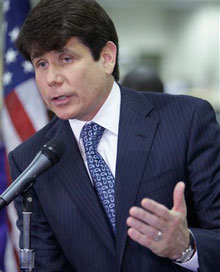 The allegations against Illinois Governor Rod Blagojevich (a Democrat; pictured), who is now in federal custody, are stunning. Trying to sell or trade President-elect Obama's Senate seat? Check. Shaking down a hospital for sick children? Check. Trying to influence the Tribune's editorial board? Check!

"In regards to the Senate seat, ROD BLAGOJEVICH stated “I’ve got this thing and it’s fucking golden, and, uh, uh, I’m just not giving it up for fuckin’ nothing. I’m not gonna do it. And, and I can always use it. I can parachute me there.” (pg 59)

ROD BLAGOJEVICH said that the consultants (Advisor B and another consultant are believed to be on the call at that time) are telling him that he has to "suck it up" for two years and do nothing and give this "motherfucker [the President-elect] his senator. Fuck him. For nothing? Fuck him." (pg 63)

Blagojevich's chief of staff John Harris was also named in the complaint. Interestingly, Blago's wife Patti makes appearances in it as well (like telling him to tell a Deputy Governor to "hold up that fucking Cubs shit...fuck them" or getting her on corporate boards for six-figure fees).

U.S. Attorney Patrick Fitzgerald held a press conference (highlights), referring to Blago's actions as a "crime spree," calling this a "truly new low" in politics and saying Lincoln would be rolling in his grave. Fitzgerald also emphasized that no allegations are being made against Obama or saying that Obama knew of anything the feds were investigating (there is mention of Tony Rezko, though). Some videos of Fitzgerald's press conference after the jump, but first, a nod to the "Chicago Way":