Illegal or Not, You're Still Getting a Parking Ticket 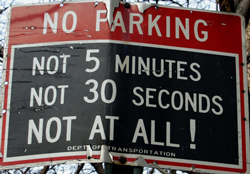 WCBS features one of those completely infuriating stories today that probably led to the origination of the phrase "You can't fight City Hall." It involves NYPD city parking agents willing to issue tickets to vehicles, whether they're legally parked or not. The news report actually videotapes a man receiving a parking ticket from a cop as he is legally parked. When he protests and points to the obvious sign that indicates that he is legally parked, the cop apologizes but says that the ticket is already written and will be dismissed in court.

The WCBS reporter said that the bogus tickets was the result of an NYPD quota that the department placed on traffic agents to generate revenue. That would certainly correspond with the report last week that traffic agents were just randomly jotting down license plate numbers and later assigning them to bogus tickets in order to conceal the fact that they were either sleeping on the job or just not working.

(Image from No parking at all!, by ianqui at flickr)