A progressive political event hosted by Broad City's Ilana Glazer was abruptly cancelled on Thursday night, after anti-Semitic messages—including "die Jew rats," "Kill all Jews," and "Hitler"—were found in the historic Brooklyn synagogue where the conversation was set to take place.

According to police, multiple floors of the Union Temple in Prospect Heights were vandalized with the hateful, threatening messages. The vandalism was discovered at around 8 p.m., just as attendees were arriving for the latest episode of Glazer's Generator Series, a live interview program featuring activists, politicians and cultural figures.

New York state senate candidates Andrew Gounardes, Democracy Now host Amy Goodman, and comedian Jim Gaffigan were all scheduled to appear on the panel, which aims to "humanize policy through storytelling." But at 8:30 p.m., organizers informed the crowd of about 200 people that they'd decided to postpone the event for security reasons.

"Ilana came out visibly upset to let us know what had happened," attendee Shelby Quackenbush told Gothamist. "We heard was that someone had just before the event scrawled anti-Semitic hate speech and slurs on the walls of the synagogue where the talk was to take place and the organizers felt unsafe continuing with the event."

My friends surprised me for my birthday tonight with tickets to see @ilanusglazer speak at @generatorcollective - a series of talks with activists and politicians about the importance of voting and humanizing politics. Unfortunately, after waiting for over an hour to enter the auditorium, we were notified that some emboldened bigot had covered the walls of the Jewish temple that was housing the event with anti-Semitic symbols and slurs. Organizers felt unsafe and uncomfortable carrying on with the event, and rightfully shut it down. THIS IS WHY WE NEED TO ELECT GOOD PEOPLE INTO OFFICE. This is why we gathered tonight. This is why we protest and demand real, direct action against acts of hate and violence. Thank you to the ever-badass @ilanusglazer and Amy Goodman of @democracynow for putting these kinds of events together and staying strong in the face of incredible intolerance. We will not be stopped or silenced. Your hate has no place in this country. ✊🏽 #VOTE

"It's just incredibly upsetting, especially after the events in Pittsburgh," Quackenbush added. "It's why we need to elect good people into office who listen and can respond to incidents of hate with compassion and direction action."

The threatening messages come less than a week after 11 Jewish worshippers were killed in the Pittsburgh synagogue massacre, and amid a surge of reported anti-Semitic activity both nationwide and in New York City. This week alone, swastikas have been reported in Brooklyn Heights and the Upper West Side.

According to NYPD Chief of Detectives Dermot Shea, there's been "an increase in anti-Semitic hate crimes, particularly swastikas, on buildings in part of the city" in the last month. "In last 28 days particularly, which is a little troublesome, we have seen an uptick," he added.

City data shows that complaints of anti-Semitism have soared since 2016, with 142 incidents reported through October 28th of this year, a slight increase from 2017. Anti-Semitic incidents make up roughly half of all hate crimes in NYC, according to the NYPD.

A string of vigils and protests have taken place in the city over the last week in solidarity with the Pittsburgh victims, and to denounce perceived anti-Semitism and white supremacy coming from the Republican party. At 5 p.m. on Friday, a grassroots group called STOP the Hate will host a vigil and demonstration outside News Corp in Midtown demanding the network "stop spreading the hate." 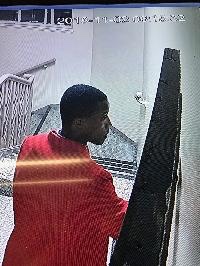 : The NYPD released an image of the suspect (right) and details of the incident: Around 8:30 p.m. on Thursday, "an unidentified individual entered 17 Eastern Parkway, Union Temple, and wrote various anti-Semitic words and statements by black marker in various locations throughout the building. The individual fled the location in an unknown direction."

The suspect is described as a male who is approximately 20 years old, 5'8", and 140 lbs, with black hair and was last seen wearing a red suit jacket.