Ikea's First Weekend: All Quiet on the Western Front 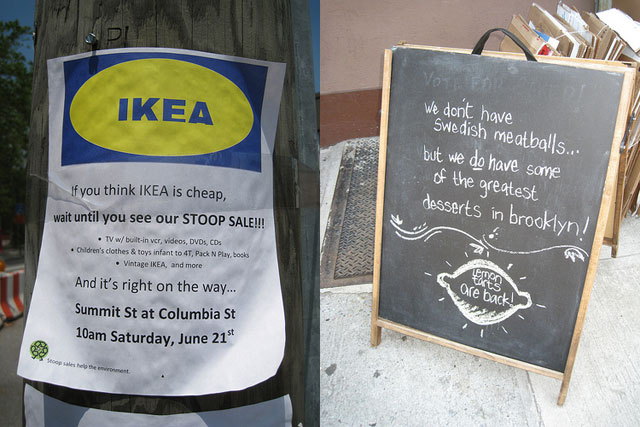 Red Hook seemed eerily quiet on Saturday, as we checked out the traffic flow on Columbia and Van Brunt Streets on the West Side of the neighborhood. Any prediction of overwhelming weekend gridlock seemed not to be panning out-- except for one Ikea bus ferrying people from Boro Hall, the scene seemed as quiet and bucolic as any summer weekend in years past. Indeed, maybe even quieter, as people who'd normally be out at the Van Brunt shops were checking out the Swedish wares. Local shops seemed to realize this-- we spotted a few signs like the ones above attempting to draw people away from the store.

Closer to Beard Street, where the store is located, we noticed more traffic-- a long line of cars backing up Columbia Street by the Projects. Most of this traffic seemed to be coming from the BQE-- in weeks hence, perhaps people will reroute along Richards and Van Brunt, as they learn the main approach along Columbia is crowded with cars. 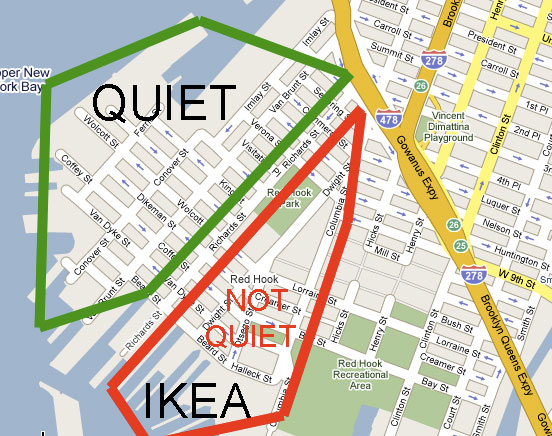 Around the store, the new Erie Basin Park seemed oddly empty, except for people coming to and from the Water Taxi pier. A few families were enjoying the deserted piers-- biking or strolling with babies-- but everyone else was inside the store. Indeed, as soon as we crossed the threshold, we were trapped in an overwhelming crowd that swept us into the labyrinth of aisles that makes up the massive building. Every nook and cranny, from the model apartments to the food court, was filled with people-- it's hard to imagine the place could get any more crowded. And yet, most of the parking lots were still empty-- what will the place be like when they are filled?

#brooklyn
#congestion
#crowds
#ikea
#opening
#red hook
#traffic
#water taxi
Do you know the scoop? Comment below or Send us a Tip