IKEA Red Hook Poised to Open, Like It or Not 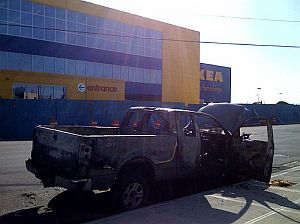 Roughly six years have passed since the controversial Red Hook IKEA was first proposed, further dividing an already fragmented community. Next month the 346,000-square-foot store, the first IKEA in New York City, will finally open on Beard Street, and, you guessed it, the community is still divided. John McGettrick, co-chair of the Red Hook Civic Alliance, insists IKEA is a waste of 22 acres of prime waterfront property and will create a traffic nightmare on Red Hook’s quaint back streets.

In attempt to mitigate the traffic problems, IKEA has arranged for New York Water Taxi to provide free service to and from Pier 11 in lower Manhattan every 40 minutes during store hours. The store will also run shuttle buses to the three closest subway stops, and the MTA will be extending the B61 and B77 bus routes to stop directly in front of the store. And for bigger purchases, IKEA will offer a courier service, starting at $39.99, with deliveries made by the following day.

Other community activists have favored the plan's new job potential, but how many locals IKEA’s hired is anybody’s guess because the company refuses to release its hiring numbers. Of course none of this will matter to consumers once the doors open on June 18th–some are even planning to camp out in front of the store to get their hands on unspecified “opening morning” prizes. And Gowanus Lounge and Racked have taken tours of the unopened store, which, you know, looks a lot like every other IKEA, despite the maritime motif subtly incorporated into the design.