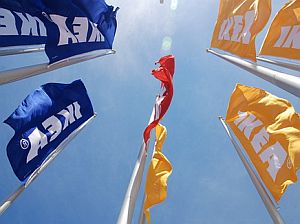 With the 346,000 square foot Ikea poised to open in Red Hook Wednesday morning, the Times fans out into the neighborhood to measure public opinion about the big Swedish store, which has come into being after vocal opposition from some local residents. The most commonly-voiced concern is about the traffic that will clog Red Hook’s streets; estimates vary from a few thousand visitors on weekdays to more than 14,000 cars a day on weekends.

Some residents like musician Naren Budhka predict that the neighborhood “will change for the worse” starting Wednesday; others, like bike shop owner German Mendez, give Ikea points for opening a new six acre esplanade with over 9,000 plants. Alan Mukamal, a community board activist, tells Time Out NY that “people aren’t going to ‘make a day of it’ and visit other stores in the area. Ikea is a time-consuming shopping experience and Red Hook is just something you drive through to get to it.”

However, some consumers are already ‘making a day of it’ – and a couple nights, too – by camping out at the store to win some fame and prizes. Racked has talked blogger Adam Robb into lining up with them, and he’s been blogging from the scene, reporting on the poor condition of the porta potties and the appearance of an easel for a possible game of Hangman! A blogger from amNY is also at the store and reveals that the first two people on line are father-daughter duo Sanchez and Brandice Jay, who last winter won $100 for dressing up as holiday packages at the Ikea in Paramus, N.J and are not ashamed to admit it.

And for the Red Hook Ikea completist, the Times also goes behind the scenes on the Ikea commercial featuring the assembly of a Brooklyn Bridge model out of cardboard Ikea boxes.

#brooklyn
#contest
#ikea
#line
#new york
#news
#opening
#red hook
Do you know the scoop? Comment below or Send us a Tip