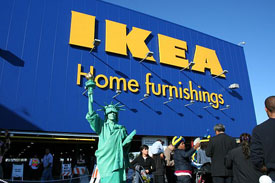 Well, we had a good run. Brooklyn commuters who've been enjoying a free ride on the IKEA Water Taxi that runs between Red Hook and Wall Street are going to have to make some adjustments: The Swedish retailer will be reducing hours on the service, which since June has been running every 20 minutes from 10 a.m. to 10 p.m. Starting October 1st, the boat will run every 40 minutes, from 1 p.m. to 9 p.m. on weekdays.

Also, those free shuttle buses that run back and forth from the store to three nearby subway stops will now run only every half-hour from 1 p.m. to 10 p.m. on weekdays, a big change from their former 10 a.m. to 10 p.m. schedule, when they ran every 15 minutes. The shuttle has been a big hit with commuters, some of whom say 'IKEA who?' and use it to go to places like the local methadone clinic. A spokesman for the store says that "after Labor Day, it [use of the service] kind of tapered off in the morning."

The Daily News boarded the bus to get some riders' reactions, and they were not pleased: "I [am] ...angry ... they cut the hours for the bus. It's way better than the city bus," says Nicky Jackson, 20, who has been using the bus to get her Red Hook home. And upon hearing of the changes, 64-year-old Lillian Massed from Cobble Hill brought some perspective to the situation: "That's a hardship."

#ferry
#free
#ikea
#riders
#shoppers
#shuttle bus
#water taxi
Do you know the scoop? Comment below or Send us a Tip