If You Want to Vote in the Primary, Make Sure You're Registered! 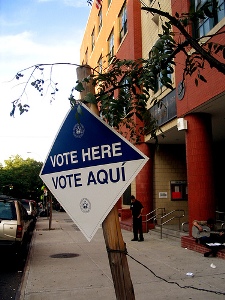 New York State's presidential primary elections has been moved up a month to February 5th this year. But if want to participate in the Super Tuesday frenzy, you better make sure you're registered to vote!

You can get a voter registration form here. And what is the big deal about a primary? Well, as the NY State Board of Elections says, "The purpose of the presidential primary is to select delegates to a national convention of a political party." For Republicans, who ever wins the primary gets all of NY State's delegates, but for Democrats, candidates win a proportion of delegates which means a number of candidates can walk away with delegates- for more explanation, read this.