If You Build It They Will Come? Port Authority Bus Terminal Office Tower Designs Revealed 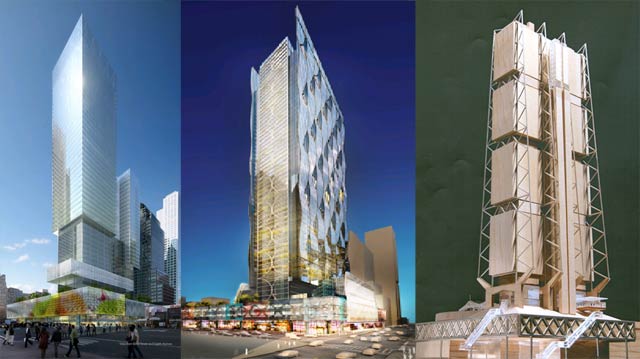 Yesterday the Port Authority unveiled designs from three architects competing to build a 1.3 million-square-foot skyscraper atop the dreary west side bus terminal's north wing. Officials say they’ll choose a winning design in the next couple months, and construction on the office tower could start next year, or maybe 2010; but what's the rush? Demand for office space in New York City isn’t exactly critical.

The three designs are all for a tower that will stand between 40-50 stories tall. The proposal submitted by Manhattan firm Kohn Pedersen Fox Architects, seen above on the left, would sheath 48 floors behind sleek, mirrored glass. The middle rendering is by Cesar Pelli, who designed the World Financial Center; his 47-story building would feature glass walls in a wave pattern and a rooftop garden. On the right is Richard Rogers’s design, which would stack four boxes on top of each other with diagonal trusswork echoing the ugly main terminal below.

Speaking of the bus terminal, the Port Authority – which is leasing the air rights for $344.5 million to developer Vornado-Ruben for 99 years – has promised to build 18 new bus gates and make upgrades that would allow 70 more buses an hour to roll in and out during peak commuting times. Also, there will be more retail and new elevators! And while they’re at it, maybe they’ll do a better job maintaining George Rhoads’s notoriously malfunctioning kinetic ball sculpture?

#Bus Terminal
#design
#plans
#port authority
#renderings
#skyscraper
#tower
Do you know the scoop? Comment below or Send us a Tip